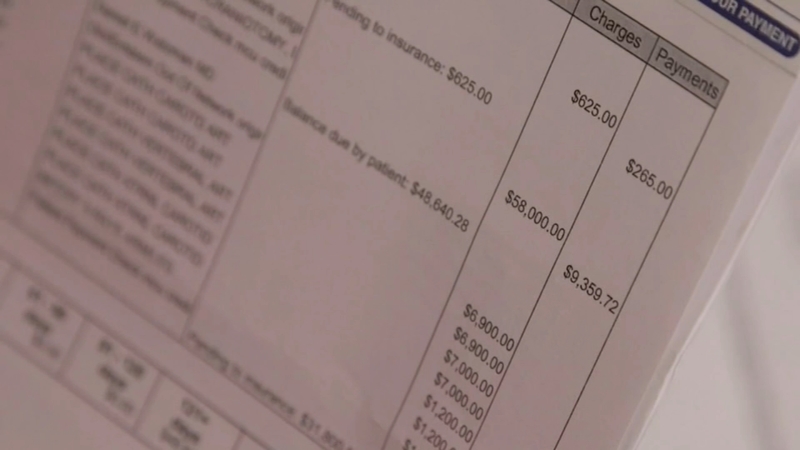 PHILADELPHIA (WPVI) -- A new investigation from Consumer Reports finds more and more patients are getting stuck with big surprise bills from the emergency room.

When Kimberly Fister-Mesch woke up in the middle of the night with head pain so severe, she thought she was having a stroke. Her husband rushed her to the ER.

"The pain was so intense that I knew something had to be wrong," she said.

To her relief - the pain wasn't from a stroke, but a serious inner ear infection.

Later she received a bill around $4,300 because her diagnosis wasn't considered a medical emergency by her insurer, Anthem. Instead, Anthem said she should have called the company's 24/7 online doctor service, or gone to her own doctor or urgent care.

But Anthem's approach takes those efforts to a potentially dangerous new level. Medical experts along with Consumer Reports say policies like Anthem's are leaving consumers with huge medical bills, and could keep patients from going to the ER when they should.

How can you make sure this won't happen to you? Consumer Reports says the first step is to understand your insurance.

"Check your insurer's 'Emergency Service Benefits' coverage to see how it defines an emergency and what your plan will and won't cover," said Margot Gilman, Consumer Reports Money Editor.

While most insurers offer general guidelines as to what constitutes an emergency, they don't limit policy holders to specific injuries or illnesses.

And if you're insurer rejects a claim, you have the right to do what Kimberly did, file an appeal. She sent a letter to her insurer, along with her medical records, and filed a complaint with her state's insurance regulator. Anthem ultimately reversed its decision.

Anthem told Consumer Reports that it is simply trying to rein in the overuse of ERs for minor problems. The insurer says the ER is a time-consuming and costly place to get care that could be handled elsewhere.

Anthem has many exceptions to their ER policy, such as if a patient is under the age of 15, and if they were told to go to the ER by their doctor.

To read more about the Consumer Reports investigation, CLICK HERE.

And this reminder about Philly Health Costs, 6abc's partnership with the Philadelphia Inquirer. The database helps you save money by allowing you to check for prices and put in the prices YOU've been charged for all kinds of medical services.

For more information and to view the Philly Health Costs database, CLICK HERE.