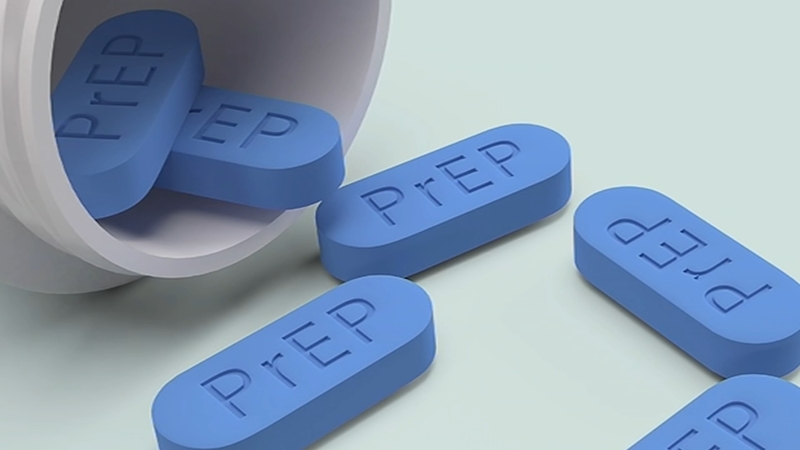 PHILADELPHIA (WPVI) -- Porsha Burton doesn't believe in the notion that a lady never reveals her age.

"My 33rd birthday," she says with a smile adding that she's grateful for every single year.

"It's a blessing. So many people that don't have the opportunity," she said.

She's seen people's lives cut short, in some cases, because of HIV.

"I had a family member who was really close to me who passed away from HIV," said the North Philadelphia native.

"It hits home for me, which is why I take PrEP," she said of the prescription drug that's used for HIV prevention.

LINK: More information about PrEP from the Centers for Diease Control and Prevention

Burton is one of the more than 285,000 Americans with a prescription for PrEP. The term "PrEP" is short for "pre-exposure prophylaxis." Doctors say it's highly effective.

"If a person gets exposed to HIV and they're on this medication, their risk of contracting HIV is less than 1%," said Dr. Mark Watkins, staff physician at Mazzoni Center. The non-profit based in Philadelphia is the largest prescriber of PrEP in the city.

Those costs can be impossible to cover for vulnerable populations, many of whom come to The Colours Organization. The non-profit, based on Chestnut Street in Philadelphia, helps connect under-served populations to PrEP.

It was founded in 1991 to focus on issues facing Black members of the LGBTQ+ community but now serves LGBTQ+ people of all ethnic backgrounds.

"I've had people come back and thank us," said Colours Community Engagement Manager Dylan Torrez of the non-profit's ability to connect people with the life-saving drug.

According to the latest available information from the Centers for Disease Control, gay and bisexual men make up nearly 70% of new HIV diagnoses. Breaking down the data by race, the CDC says that Latinos make up 27% of new HIV cases. African Americans make up 42%.

"People of color, LGBTQIA aside, are disproportionately affected by HIV," said Torrez.

"Some of this (coverage) was supposed to go into effect in January of 2021," he said.

Now participating in campaigns and awareness events focused on PrEP, Burton hopes making PrEP more available will remove the barriers and the stigma of protecting against HIV.

"It's no right or wrong way besides not doing it your way," she said.

The South Philly spot just added an HIV testing site to its second floor and is currently fundraising for a major expansion that will add 3,000 square feet to its flagship location.