"It was like a war zone," said resident Thomas See.
WPVI
By Corey Davis 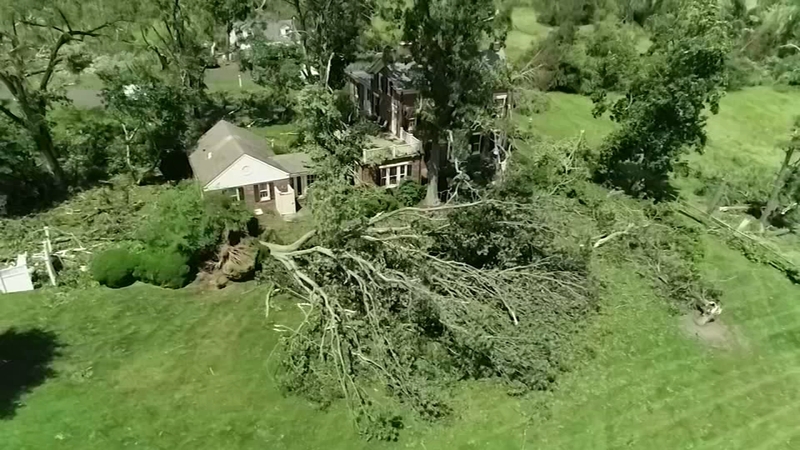 Tree after tree is snapped in half and dozens of others uprooted as homeowners access the damage along Church Road in Titusville caused by Thursday's severe weather.

Many trees are now dangling dangerously from power lines and covering vehicles parked in driveways as people work to clean up.

Families are doing their best to keep the power running with generators.

"I was out when this came through and watched it knocking down our neighborhood," said neighbor Bob English.

The thunderstorms initially swept through Bucks County on the Pennsylvania side of the Delaware River Thursday night and then crossed over into Hopewell Township and areas around Trenton.

"You could see it come across the field," English said.

The National Weather Service said witnesses reported seeing a large tornado on the ground, which left behind widespread damage in two states and multiple neighborhoods.

"But it was only when we got to Titusville area that we saw the devastation. It was like a war zone," said resident Thomas See.

With the horror of the storm engraved in their minds, a grandfather spoke about how they had to huddle in the basement praying as the door tried to blow open.

"There are huge trees down everywhere but not one single tree hit the house, so I believe this is God's moment," said Brian Sumner.

Action News Meteorologist Karen Rogers explains, typically, tornadoes in our area are not on the ground long enough to collect enough debris that they can be spotted on radar. However, three such tornadoes occurred on Thursday.

The National Weather Service will be making their way around trying to determine the exact strength of the storms.

Neighbors in Hopewell Township, Mercer County are cleaning up after a tornado.