The national program is the largest investment in bridges since the interstate highways were built.
WPVI 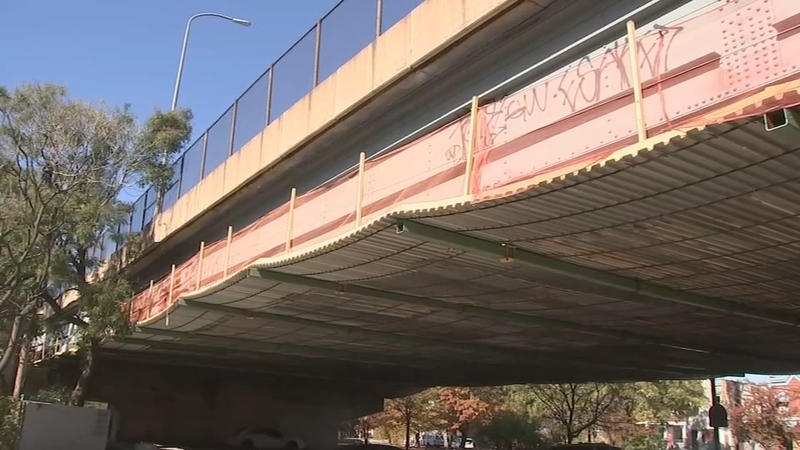 PHILADELPHIA (WPVI) -- The White House used Philadelphia as a springboard to launch a massive portion of its infrastructure plan on Friday.

The national program, the largest investment in bridges since the interstate highways were built, will deliver $1.6 billion to Pennsylvania alone.

The funding will help improve the condition of about 3,195 bridges in poor condition and to preserve and improve about 12,260 bridges in fair condition in the state, the Department of Transportation said.

Friday's event was held by the MLK Drive bridge, which is in need of much-needed repair.

"Last year the inspection of the underside of the bridge found one of the connections of the steel framing to be about 75 percent deteriorated. As a result, we forced to keep the bridge close to vehicular traffic," Philadelphia Mayor Jim Kenney.

"Residents of this city know how important it is to have bridges in good working order. The Martin Luther King Bridge is an example of one that for safety reason is not available in the way that it could be or should be," said Sec. Buttigieg.

There are over 22,000 bridges in Pennsylvania and more than 3,000 are classified as structurally deficient. More than 11,000 need some type of repair.

The Action News Data Journalism Team found that all of the top 10 most traveled but structurally deficient bridges in Pennsylvania are in our area - and most of them are along I-95.

It's estimated that it would cost more than $20 billion to repair all the thousands of bridges that need work in the state. Action News asked Secretary Buttigieg if the $1.6 billion being allocated to Pennsylvania was enough.

"This is going to be the biggest investment that has come from the federal government since the interstate highway system was set up in the first place, but there still needs to often be state or local action too," said Buttigieg.

Nationwide, the Bridge Funding Program is expected to help repair about 15,000 bridges. State and local leaders say stronger infrastructure equates to a better quality of life for all communities.

"Our society depends on infrastructure, on these bridges, on these connections. Modern reliable infrastructure is essential for Pennsylvania, for our businesses, for our people, for everybody," said Governor Tom Wolf.

We also learned that New Jersey will get more than $1.1 billion, while Delaware is getting $225 million for bridges.

The funding is part of the bipartisan infrastructure package that Biden signed into law in November.

While the program is slated to help repair thousands of bridges across the country, the administration is also seeking to use the program to increase resiliency when it comes to climate change, as well as make bridges safer for cyclists and pedestrians.
Across the country, the program is expected to help repair approximately 15,000 highway bridges, and will be allocated to each state according to a needs-based formula -- though the choice of which projects are undertaken are left up to the states.

Meanwhile, you the American Road and Transportation Builders Association maintains a list of the most structurally deficient bridges in each state. To see the list for your community, click one of the links below: