"I think HBCU's are headed where they should be," said Dr. Vernon Ross.
WPVI
By TaRhonda Thomas and 6abc Digital Staff 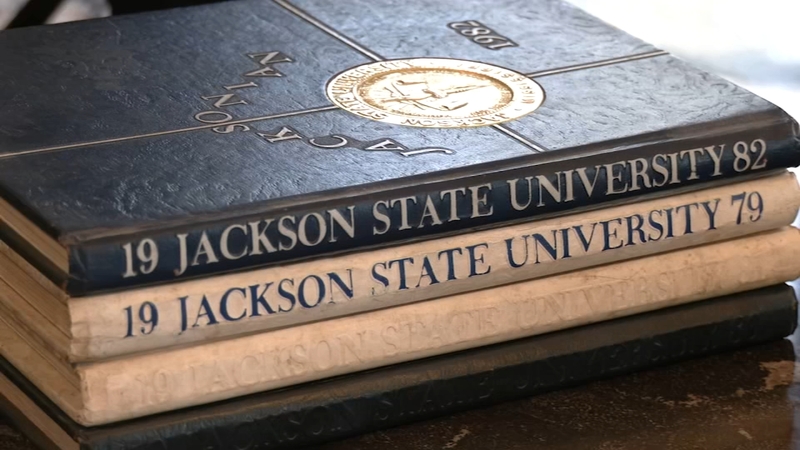 PHILADELPHIA (WPVI) -- As Dr. Vernon Ross, Jr. looks through his 1982 copy of Jackson State University's yearbook, he feels like he's been transported back in time.

"That's me," he exclaimed with a laugh after finding a photo of himself as a junior in college.

Ross is reliving his college years alongside fellow Jackson State alum Derrick G. Gilbert, who played baseball with the team and graduated in 1994. Both are members of the Greater Delaware Valley Jackson State University Alumni chapter.

"Being a former athlete in its heyday when Jackson State was on top," said Gilbert of his college years.

It feels like those college years all over again because Jackson State is back on top with its football program.

Jackson State will take on South Carolina State in the Celebration Bowl Saturday at noon on 6abc. The game is known as the championship for Historically Black Colleges and Universities.

"I knew big things would happen when Deion Sanders came on board, but that's the Jackson State way," said Gilbert.

NFL Pro Hall of Famer Deion Sanders signed on to coach the team last year. He just landed the nation's number one recruit-- putting all eyes on HBCUs.

It's not just about Jackson State and South Carolina State. National attention for two HBCUs helps all HBCUs including Lincoln University in Chester County.

"Now people are getting more exposure to what historically Black colleges provide," said Lincoln University Head Football Coach Joshua Dean. "Jackson State has been on ESPN every week. And that never happened in the past."

There's also good exposure for HBCUs happening off the field, like the attention that came with Vice President Kamala Harris being an HBCU graduate.

"I think HBCUs are headed where they should be," said Ross.

He and Gilbert are glad that the nation is now getting to know what they learned decades ago: the power of HBCUs.