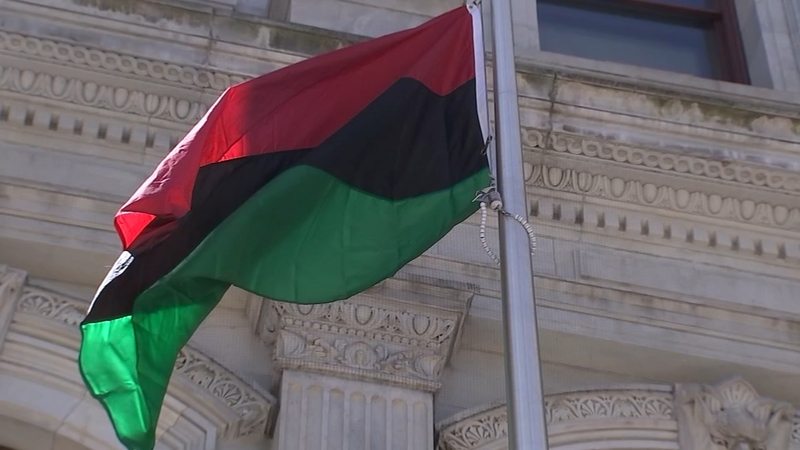 PHILADELPHIA (WPVI) -- The City of Philadelphia hosted a flag raising ceremony outside of City Hall on Wednesday in honor of Juneteenth.

Juneteenth is the holiday that recognizes the first day of freedom for enslaved Africans in Texas and commemorates the end of slavery in the United States as a whole.

Wednesday's event comes one day after the US Senate passed a resolution that establishes June 19 as a federal holiday.

The nation is a year behind Philadelphia which made Juneteenth a city holiday last year, acknowledging the accomplishment of African Americans who largely went unacknowledged.

"They were in anonymity when they did it, and part of what we're about now is bringing those folks' stories up to the surface so we can honor them the way they should've been honored when they accomplished the things that they did," said Philadelphia Mayor Jim Kenney.

No longer limited by the pandemic, the Juneteenth celebration will resume this year bringing a parade, activities and business back to the 52nd Street corridor.

"We all have a role to play in getting economic justice in our city," said Philadelphia Commerce Director Michael Rashid.

6abc President and General Manager Bernie Prazenica participated in Wednesday's flag-raising and talked about ABC's "Juneteenth: Together We Triumph - A 'Soul of a Nation' Special Event," which airs Friday at 9 p.m.

"We're very proud to be a part of this. We're privileged to live in this community," said Prazenica.

As residents celebrated the flag-raising filled with that anticipation of Juneteenth being named a national holiday, they also looked forward to a celebration for the entire community.

"I think it would be a great celebratory moment for people who don't know anything about Juneteenth," said Khaleef Alexander of the organization Millennial Juneteenth.

6abc is once again the broadcast sponsor for the festivities in Philadelphia.