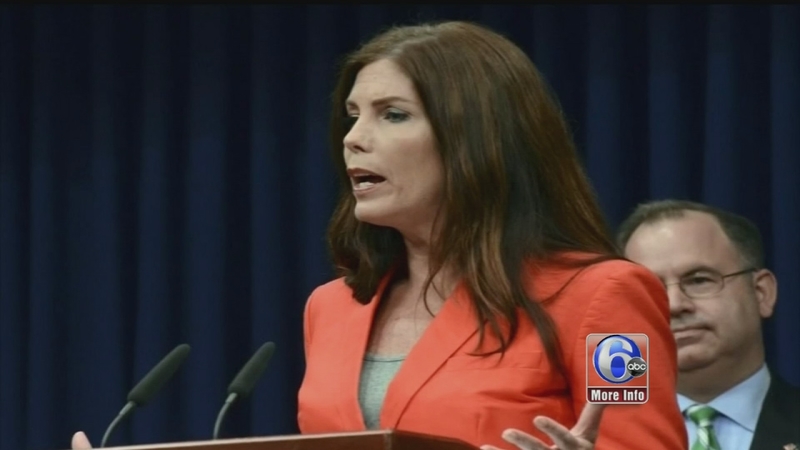 HARRISBURG, Pa. -- Pennsylvania's embattled top prosecutor told a judge Thursday she had no knowledge of grand jury leaks during the investigation into Jerry Sandusky, according to a lawyer for the former Penn State assistant football coach.

Defense attorney Al Lindsay told reporters that Judge John Cleland would make public a transcript of the 45-minute, closed-door questioning of Attorney General Kathleen Kane, who faces perjury and other charges in an unrelated case.

"I think generally, she did not have an opinion or direct knowledge of any leaks, either directly by her office or by the supervisory judge of the grand jury," said Lindsay, who wants subpoena power as he pursues an appeal of Sandusky's 2012 conviction on 45 counts of child sexual abuse.

Kane left the courthouse without commenting, but a spokesman said she was pleased that Cleland was interested in hearing the facts.

Kane was ordered to testify a week ago, after issuing a news release attacking Barry Feudale, a judge who supervised the grand jury that investigated Sandusky and recommended charging him with repeated child sexual abuse four years ago.

She accused Feudale of secrecy violations stemming from her successful effort to remove him from grand jury duties, and in the next sentence she noted Sandusky's latest appeal.

Lindsay said Cleland did most of the questioning, and that the judge plans to make a transcript public. A court spokesman said Cleland was preparing to issue an order in the matter.

Sandusky is pursuing an appeal under Pennsylvania's Post-Conviction Relief Act after having lost direct appeals, and is now limited in the types of claims he can make. Lindsay has argued there are extraordinary circumstances that warrant getting subpoena power to examine, among other things, contacts between Feudale and state prosecutors.

When Lindsay pushed for access to that information in late September, Kane said she suspected Sandusky leaks came from within her agency.

Kane awaits trial on criminal charges that include perjury for allegedly leaking secret grand jury information in another case to a newspaper and lying about it.

She denies any wrongdoing and has resisted calls to resign.