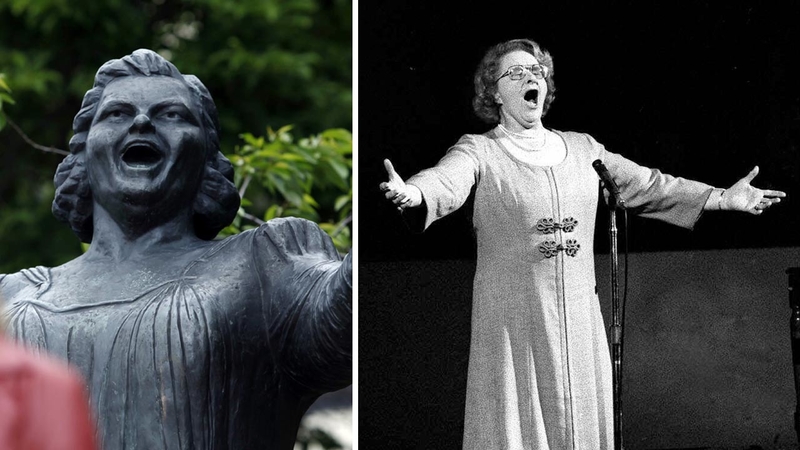 SOUTH PHILADELPHIA (WPVI) -- On Tuesday morning, a concrete saw took down what was left of a sight familiar to any Flyers fan outside the Wells Fargo Center in South Philadelphia.

The pedestal upon which the bronze Kate Smith statue stood for almost a decade was removed just days after the 40-year-old statue itself was taken down.

For decades, Smith's popular rendition of "God Bless America" was played before every Flyers game. That's now been scrubbed from the organization's playlist.

"I don't think it's an overreaction," said Alina Daniel of Northeast Philadelphia.

It is a reaction though, a strong one, by the Flyers organization to racist lyrics the late artist sang in the 1930s. But equally as strong is the backlash.

"I think it's the right thing to do to take it down," said Alex Thompson of South Philadelphia. "The song has some history with the organization, but when those findings come out after the fact you kind of have to do what's right."

Among the most vocal critics is Wildwood mayor Ernie Troiano.

He said on the Dom Giordano radio show Monday that he will continue playing Smith's iconic song along the boardwalk.

Wildwood has a tradition of raising the flag every morning on the boardwalk while playing Smith's song.

On Monday night, Action News tracked down the mayor who turned down an on camera interview. He said that he plans to talk to his cabinet to make sure they all feel as passionate about the issue as he does. Though passion is something he's likely to find on either side of the issue.
Report a correction or typo
Related topics:
societysouth philadelphiaaction news sportsphilly newsphiladelphia flyers
Copyright © 2021 WPVI-TV. All Rights Reserved.
TOP STORIES
Police: Man dies after apparent road rage shooting in Philly
'It was like an explosion': NJ family says falling ice hit home
Family gathers to remember teen gunned down at bus stop
Philly's iconic Belmont Maple tree scheduled to come down
Vigil held for slain Temple University student
$12,000 worth of equipment stolen from Montco football team
No arrests made after standoff with homicide suspect in Philly
Show More
Surgeon General reacts to Biden's winter COVID strategy
Afghan evacuees adjusting to new lives in New Jersey
Man in custody following Upper Darby shooting spree
2 cats found shot to death in South Philly
Suspect identified in deadly Cherry Hill hit-and-run
More TOP STORIES News