Prosecutors say the government is committed to retrying the case.
WPVI
By Maggie Kent, 6abc Digital Staff and Annie McCormick 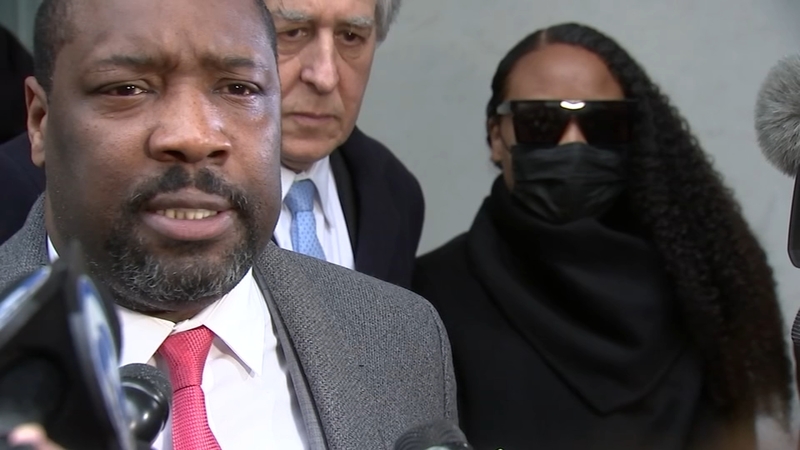 PHILADELPHIA (WPVI) -- A mistrial has been declared after a jury deliberating the fate of a Philadelphia councilmember and his wife was not able to reach a verdict.

A jury of nine men and three women began deliberating on April 13 in the trial of Philadelphia City Councilmember Kenyatta Johnson and his wife, Dawn Chavous.

The FBI investigated this case for six years, interviewing 150 people, before charging the couple with two counts of honest services fraud, which is punishable by up to 20 years in prison.

After 25 hours of deliberations, the jury told the judge Tuesday afternoon they were "unable to unanimously come to an agreement," and that they did not "believe any individual will change their minds, even with additional evidence."

A spokesperson with the US Attorney's Office of Eastern District of Pennsylvania says the government is committed to retrying the case against Johnson and Chavous.

Johnson briefly spoke to members of the media after leaving the courthouse.

"First and foremost, I just want to thank my lord and savior Jesus Christ, and I want to thank all of my family, friends for just praying for us and showing us support during this stressful time," said Johnson.

Kenyatta Johnson speaks to the media on April 19, 2022, after a Philadelphia judge declares a mistrial in the councilman's federal bribery case.

Federal prosecutors alleged Johnson, a three-term council member, and his wife were offered $66,000 in bribes disguised as consulting work for Universal Companies.

In return, Johnson allegedly used his position on City Council to introduce and vote on spot zoning legislation which, ultimately, financially benefitted Universal Companies, which owned property in Johnson's district.

The jury was asked to decide whether the defendant knowingly devised a scheme or was willing to participate in a plan to defraud residents.

Prosecutors say as a consultant, Chavous did very little work and once she received her consulting fees, she transferred the money to her and Johnson's personal bank accounts.

The Universal Companies executives face charges, including racketeering, conspiracy, tax evasion and wire fraud. A date for their trial has not been set.