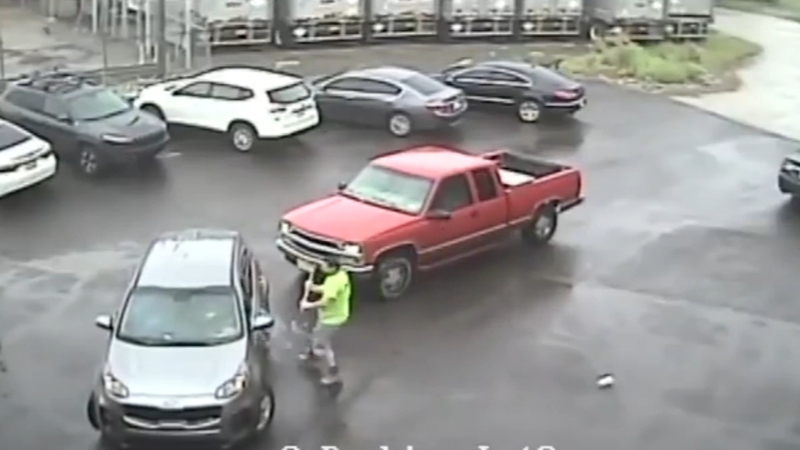 PORT RICHMOND (WPVI) -- A surveillance video from a Port Richmond parking lot has now gone viral for the disturbing events depicted within.

The video shows a red pick-up truck following a vehicle into a parking lot on the 2700 block of East Luzerne Street.

The person behind the wheel of the pick-up truck gets out, armed with a sledgehammer, and repeatedly hits the driver's side door of the other vehicle, smashing the window along the way.

As the driver of the vehicle tries to get away, the passenger side door opens and someone falls out, that passenger is then attacked by the hammer-wielding suspect.

The passenger eventually re-enters the vehicle which quickly exits the scene.

Police officials said they would certainly like to investigate this case but they can't make out the license plate numbers of the vehicles involved.

Also, Philadelphia Police Spokesperson Captain Sekou Kinebrew said the victims have not come forward, which is kind of unusual.

"Most victims of crimes self-report if they are capable of doing it," he said. "If they are not able to, we'll get third-party reports, but if they're not incapacitated typically it's the victim that self-reports."

Action News spoke to a witness who says he heard the attacker saying something to the effect of "stop cheating with my girlfriend."

Investigators said they are hoping that tidbit of information coupled with the surveillance video will result in a tip-call.

"If anyone sees this and they recognize the people, primarily the person who committed the act, we want to know that as well. But we certainly want to provide assistance and help and justice for what appears to be the victim of a serious crime," said Kinebrew.