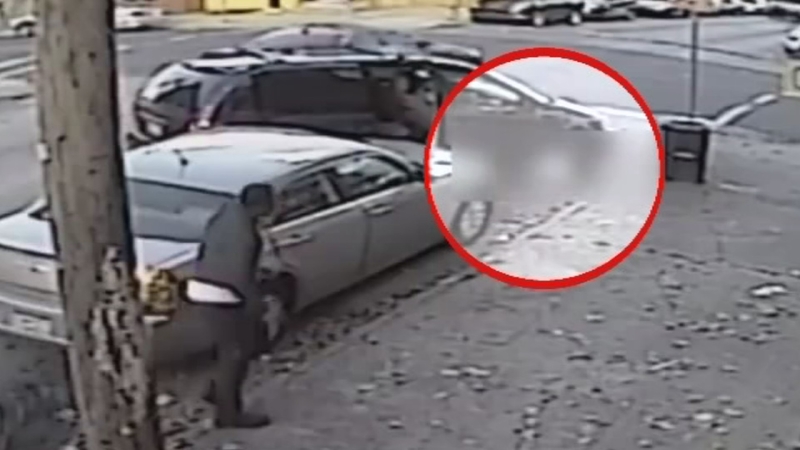 WEST PHILADELPHIA (WPVI) -- Philadelphia police are asking for the public's help tracking down two suspects in connection with a hit-and-run crash in West Philadelphia that left a pedestrian seriously injured.
Police released a new surveillance video of an aggravated assault at 56th and Wyalusing on October 24.

The 25-year-old victim, who is highlighted in the video, was standing out on the street when a minivan pulled up with a woman behind the wheel, a female passenger, and a man in the back.

Philadelphia Police Lt. John Walker said, "There seems to be some kind of conversation. Something the effect of 'I didn't realize you lived in this neighborhood.'"

The man in the back opened the rear door of the minivan and shouted to two men walking down the street - asking if they knew the victim.

Police say the man then got out of the vehicle and approached the victim. Police assumed to fight. That's when the female driver hit the gas pedal- plowing directly into the man on the corner.

"It's horrifying. I've seen a lot of cases in my career and to see this car just ram into a person, run them over and then just back up and run him over again, and then just slowly drive off and watch the person squirming on the ground, it's just a horrifying case," said Lt. Walker.

Three men at the scene walked away as the minivan slowly drove off leaving the victim in the street with critical injuries.

Police want to talk to the those men as they work to find the minivan and identify the driver.

Rodney Pope of West Philadelphia said, "I just seen the cops walking around looking like they were looking for evidence or something like that."

The victim is transgender - and police are considering that as one of many possible motives.

"We're not sure. We don't have a motive at this time but it's always something we look at in these investigations, and obviously we take these types of crimes very seriously," said Lt. Walker.

The victim tells police he doesn't know the attackers. He lives elsewhere in the city and was visiting friends that afternoon.

He remains in the hospital after undergoing multiple surgeries for a broken pelvis and a fractured femur.