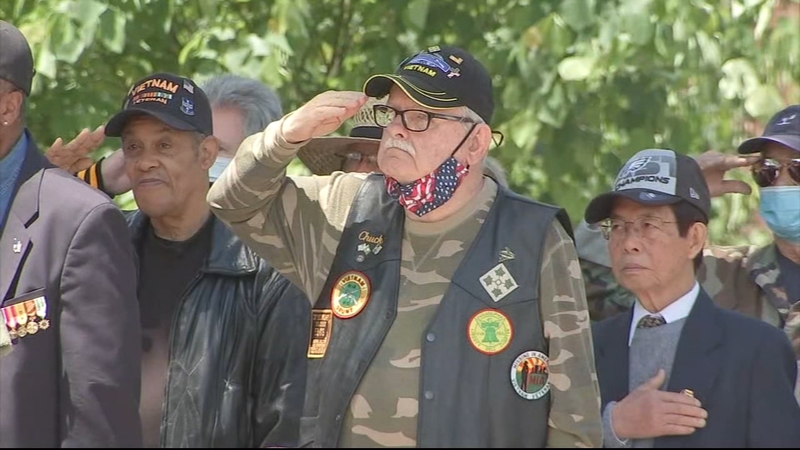 Remembering the brave on Memorial Day in Philadelphia

The Spirit of Liberty Foundation invited local veterans to unfurl their 'America's Heroes' flag, for the first time.

Spirit of Liberty Foundation unfurling two flags at Independence Hall this morning. From here, they will be driven to Washington, D.C. to the Washington Monument and walked by veterans down the National Mall. pic.twitter.com/bLGdC4MAxI

"This flag is dedicated to the men and women who have fought," said Richard Rovsek, Chairman of the Spirit of Liberty Foundation.

The flag itself contains all six flags from each branch of the military sewn together in the order of their founding, plus the National Guard flag and the POW/MIA flag.

"What's really the heart of it is it's framed on two sides with images of over 100 images from 1776 to date of men and women fighting in our armed forces," Rovsek said.

From here, the flag was driven to Washington D.C. by motorcade.

The flag would stop at the Washington Memorial and walked down the National Mall making stops at war memorials.

But before the flag left Philadelphia, local veterans stood, holding the edges, explaining the importance to stop to remember.

"We've all lost people in the war, so to us, it honors them to come out and support them," said Stephen Judge of Booths Corner.

"We're grateful we're here, but for the ones that are not - we're here to honor them," added Alfred Robinson of Darby.

Last year, many parades and remembrances were curtailed or canceled due to the pandemic.

The Pennsylvania Veterans of Foreign Wars Commander Ronald Peters explained the importance of resuming these events this year. The VFW and other veterans service organizations are spending the day honoring the fallen.

"It's a moment for all of us in this nation to pause and reflect and look at what we have, and they did it at the cost of their lives. It's a humbling experience," Commander Peters said.

The Battleship New Jersey in Camden honored military heroes who gave the ultimate sacrifice. A wreath was thrown on the Delaware River, a salute was fired from the portside saluting gun, and Taps was played.

"It's not the day of barbecues and tongs, it's the day that we're supposed to stop, remember, mourn and salute," said Patrick Dugan, a Korean War Memorial board member.

Dugan said the event is scaled back this year due to the coronavirus, as they didn't know what restrictions would be in place in time for Memorial Day. While the event was shorter, participants laid wreaths, heard from Gold Star families and the Philadelphia Police Honor Guard gave a 21-gun salute.

Korean War veteran Paul Kowalewski spent nine months in combat and said unfortunately, it's the "forgotten war." However, he said he will never forget what they endured on the ground.

"It's pretty difficult to explain combat if you've never gone through it, but it just, it was nine months of hell," said Kowalewski. "A lot of our friends never made it back because they were POWs and some died in captivity. A lot of them died in captivity."

Vietnam Era veteran Andre Mears said he lost his classmate, Douglas Royster, in the Vietnam War. He said he visits the Philadelphia Vietnam Veterans Memorial each year to pay his respects.

"It's like any other grief only I believe it hits you deep knowing the way that their lives were taken," said Mears.

"Originally I am from Vietnam and we think we all owe so much to the American armed forces for being our ally in Vietnam during the war," said Dr. Anh Ly, Philadelphia Vietnam Veterans Memorial Fund Board Members.