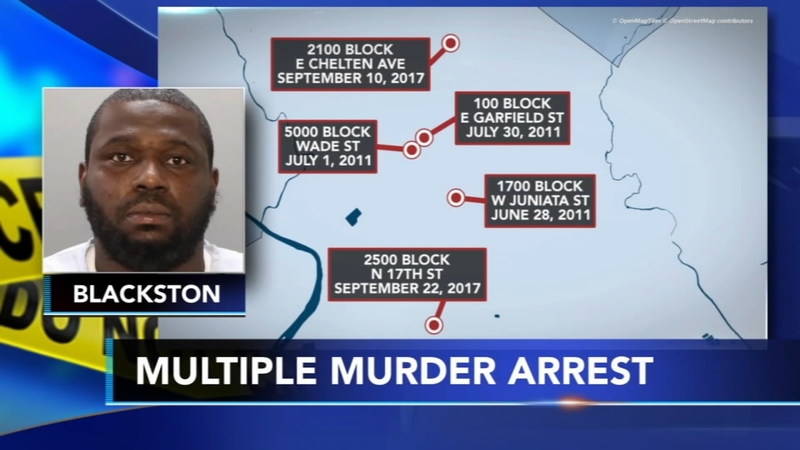 PHILADELPHIA (WPVI) -- Philadelphia police say they solved at least six cold-case murders with the arrest of one man, over the weekend.

Michael Blackston, 29, of Philadelphia's Tioga-Nicetown section, was arrested on Saturday in connection with six murders dating back more than 8 years.

Tracy Goldstein-Jackson remembers July 1, 2011, like it was yesterday when her 22-year-old son was gunned down in their Germantown home.

Over the weekend, authorities arrested Blackston with Garry Wilson's murder and four separate murders between 2011 and 2017. The alleged serial killer was already in jail for a sixth murder that happened in December 2011, when he was linked to these new crimes.

"I started crying," she said. "You just wouldn't think that the person who murdered your son was responsible for killing all those other people."

It's a sense of relief, but I still can't get him back, and my son doesn't have a dad," said Naadirah Fate.

Detectives say Blackston is also behind the September 2017 murder of Michael Cousette, who was gunned down in North Philadephia.

Detectives have not revealed how they connected Blackston to these additional murders, nor if he used the same weapon in each murder, but it's one step closer to justice for these families who can now point a name and face to their loved ones' killer.

"I have not forgiven him, maybe one day I will. But I don't forgive him for what he did to me and my family," said Goldstein- Jackson tearfully.

Blackston is responsible for the murder of Saleem Garland in June of 2011, Kristin Freeman in August of 2011 and Branden Vincent in September of 2017.