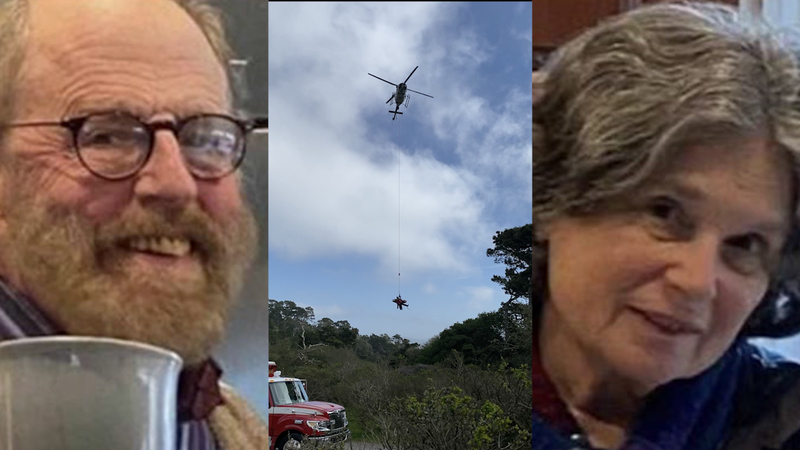 MARIN COUNTY, Calif. -- The couple who disappeared during a hiking vacation in Northern California were found alive after a week-long search.

Rescuers extracted the couple using a helicopter and transported them to a hospital.

Officials said they are doing OK, suffering only from slight hypothermia. They were able to stay alive by drinking from a puddle where they were located.

"Thank God you found us. We're so happy," the couple reportedly said after they were found.

A big shout out to @sonomasheriff for the amazingly quick response, professionalism, and their ability to get Carol and Ian to the medics the fastest way possible. pic.twitter.com/jr7RwuiPII

Kiparsky and Irwin were on a hiking getaway and staying at an Airbnb cottage in nearby Inverness. They went on a Valentine's Day hike but reportly got lost in the dark and don't know what happened after that.

Family members said they last heard from the couple on Feb. 14, but the Airbnb owner called police when the couple didn't check out as scheduled Feb. 15.

Carol and Ian are on there way to a local hospital. Both were extracted by @sonomasheriff helicopter and @MarinSAR @marincountyfire pic.twitter.com/3FwNRm6iiu

Officials had announced Thursday afternoon that search and rescue effort for the Palo Alto couple turned into a search and recovery mission, meaning the couple was presumed dead.

The Marin County Sheriff's Office held a Saturday morning briefing and said along with 57 personnel working in the search, they had K9s, drones, Mounted Posse, boats and airplanes involved in the search.