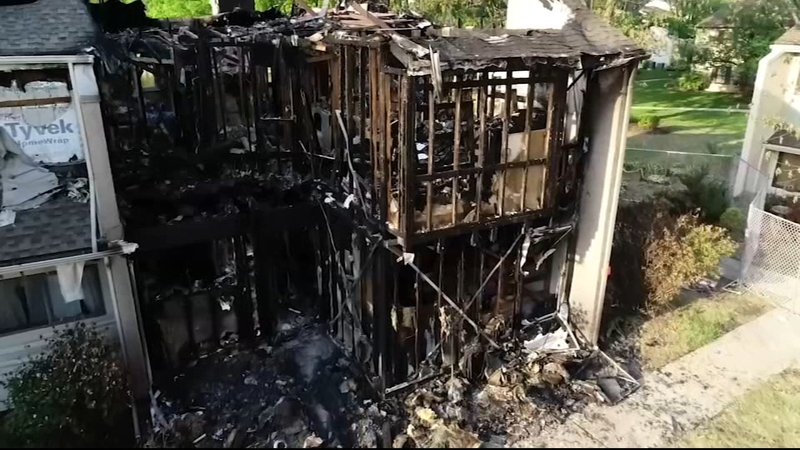 MOUNT LAUREL TWP., New Jersey (WPVI) -- A Mount Laurel, New Jersey community is rallying around a family who lost everything in a house fire on Tuesday.

Colleen McGinn and Christopher Sutton live at the home with their children.

McGinn says her aunt and three dogs were the only ones inside at the time of the blaze. Her aunt and one of the dogs, named Tinkerbell, made it out.

The two other dogs didn't survive.

"My neighbor called and said the house was on fire. So I rushed home and everything was gone," recalled McGinn on Wednesday night. "We lost Abby and Roxy in the fire and they didn't stand a chance."

But as quick as the fire destroyed so much of their lives, their friends Betsy and Gabrielle Turgeon began to help them rebuild.

"These are the most kind, genuine people that I've ever met," said Betsy Turgeon.

"As soon as a we got the phone call I jumped into action. I was like, 'What can I do?'" said Gabrielle Turgeon.

They put up a message on social media asking for donations. Within no time, clothes and so much more came pouring into the Turgeon's home.

"People genuinely care about each other here, it's just so heartwarming to see," said Betsy Turgeon.

McGinn says her whole family is beyond grateful.

"I would never think in a million years that something like this would happen. The community has rallied around to help us," said Sutton.

The family's dog, Tinkerbell, came home from the animal hospital on Wednesday night. She is expected to be OK.

If you are interested in helping the family, you can email Betsy Turgeon HERE.