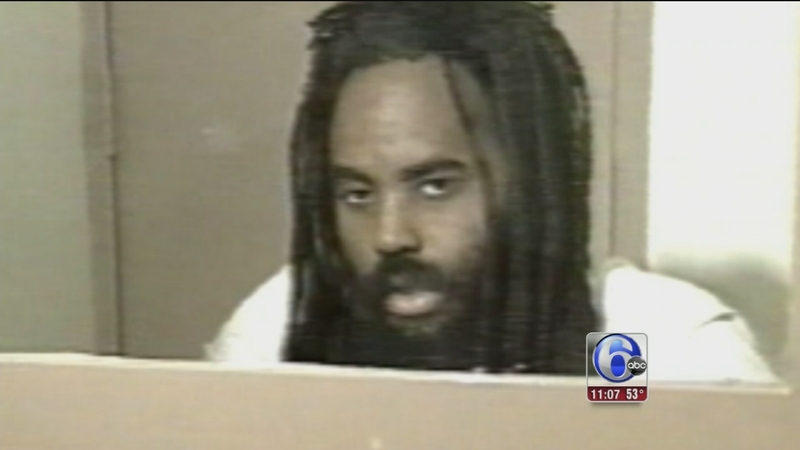 PHILADELPHIA (WPVI) -- A one-time death row inmate now serving a life sentence for the 1981 murder of a Philadelphia police officer spoke to students graduating from a Vermont college on Sunday, encouraging them to strive to transform the world.

Mumia Abu-Jamal spoke by audio to 20 students receiving bachelor degrees from Goddard College in Plainfield. He earned a degree from the college in 1996.

"Think about the myriad of problems that beset this land and strive to make it better," Abu-Jamal said in the audio message.

He said his studies at Goddard allowed him to learn about important figures in distant lands.

"Goddard reawakened in me my love of learning," he said. "In my mind, I left death row."

The former Black Panther did not address the crime for which he was convicted. He originally was sentenced to death for killing white police Officer Daniel Faulkner on Dec. 9, 1981, but he was resentenced to life in 2012.

Meantime, supporters of Officer Daniel Faulker's family are making sure the public remembers the man whose life was taken away.

It was quite a show of support for Faulkner - a 30 minute moment of silence in front of Faulkner's memorial plaque at 13th and Locust streets.

The head of the Philadelphia chapter of the Fraternal Order of Police, John McNesby, says, "Apparently this is a school up there where they don't grade you, there's no teachers, there's advisers. So I don't know who's advising them, but obviously they're not doing a good job."

There was immediate outrage when Abu-Jamal was invited by the graduating students at Goddard College.

Sunday, before more than 100 people stood to honor Faulkner at the spot where he was killed, his widow Maureen released a scathing statement.

"Mumia Abu-Jamal will be heard and honored as a victim and a hero by a pack of adolescent sycophants," she said.

Abu-Jamal, the man who has claimed his innocence and has international support, has delivered commencement speeches before, but it's been nearly 15 years.

Pa. State Rep. Mike Vereb says, "Unless we are going to build production studios in our prisons for these types of thugs, who continuously rip the scabs off the victims' wounds, we have to do something."

Vereb says he doesn't want to tread on first amendments rights, but he's introduced a bill that's making its way through the legislature that will give a court power to stop this from happening again.

"We want our victims to be free to grieve, to move on, to heal. And we want our police officers to know that in Harrisburg whenever we hear that these travesties occur we're going to weigh in where we can, practically," he said.

Critics say if that bill passes and if it's signed by the governor it will likely face a court battle.

Below is Maureen Faulkner's statement in its entirety:

Once again, my family and I find ourselves being assaulted by the obscenity that is Mumia Abu-Jamal. On Sunday October 5th, my husband's killer will once again air his voice from what masquerades as a prison, and spew his thoughts and ideas at another college commencement. Mumia Abu-Jamal will be heard and honored as a victim and a hero by a pack of adolescent sycophants at Goddard College in Vermont. Despite the fact that 33 years ago, he loaded his gun with special high-velocity ammunition designed to kill in the most devastating fashion, then used that gun to rip my husband's freedom from him--today, Mumia Abu-Jamal will be lauded as a freedom fighter.

Undoubtedly the administrators at Goddard who first accepted, then enthusiastically supported Abu-Jamal as their speaker will be moved by his "important message" when, if one distills that message to its basic meaning, it amounts to nothing more than the same worn out hatred for this country and everyone in law enforcement that Mumia Abu-Jamal has harbored his entire life.

Many at Goddard College have said that this is a matter of Abu-Jamal's First Amendment right to speak and be heard. What a convenient way to dodge their responsibility to take a moral position on this situation. This is not a matter of First Amendment rights -- it's a matter of right and wrong. Across the country, people have been voicing their disgust with the wrong that the college is about to commit by allowing a convicted cop-killer to speak to them. Is this the message to be heard? How could they allow him to speak when Danny no longer has a voice?

It is my opinion that all murderers should forfeit their right to free speech when they take the life of an innocent person. I have repeatedly seen college administrators deny conservative and religious speakers access to their campuses when even the tiniest minority feel their message is in some way offensive. What could be more offensive than having a person who violently took the life of another imparting his "unique perspective" on your students?

Let's be honest. The instructors, administrators and graduates at Goddard College embrace having this killer as their commencement speaker not despite the fact that he brutally murdered a cop, but because he brutally murdered a cop. Otherwise, like so many other speakers that have been denied access to college campuses across the country, Goddard's administration would have lived up to their moral responsibility and pulled the plug on this travesty long ago.

Shame on Goddard College and all associated with that school for choosing to honor an arrogant remorseless killer as their commencement speaker. Unfortunately, this is something that I am certain they will be proud of for the rest of their lives.