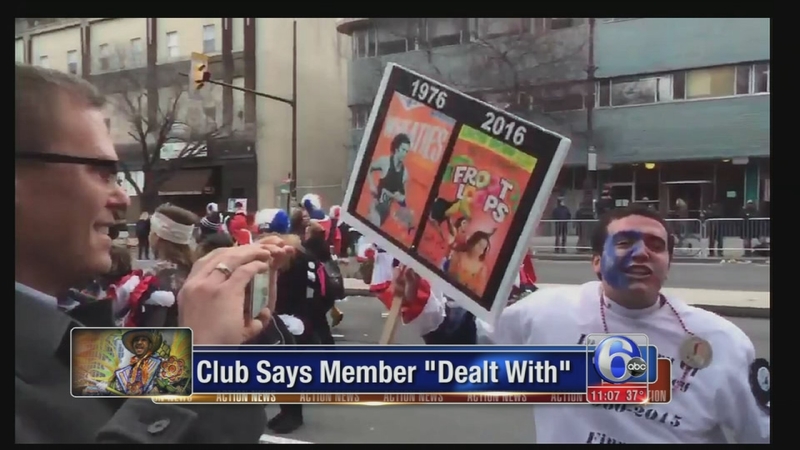 CENTER CITY (WPVI) -- The captain of the Finnegan's New Year's Brigade has responded after one of his members was caught on video making a homophobic remark.

The video shows the man yelling the slur as he marched along Broad Street on Friday. He has since been banned form the club, and is no longer allowed to be a Mummer or march in the parade.

The Goodtimers Comic Club and Finnegan New Year Brigade (NYB), which marches in the
Goodtimers Club, condemn the hateful speech spoken by a person marching with Finnegan on New Year's Day. As a result of this man's behavior the following action has been taken.

1. The person has been banned from Finnegan NYB and from the Goodtimers.

2. The person will not be allowed to march with any other club. As of this time, he is no longer considered a Mummer.

3. Finnegan NYB is reaching out to the LGBT community and offering its services to help with an LGBT fundraiser or equality awareness, and to learn more about LGBT concerns.

Earlier in the day, the club sent out a tweet stating the man is a "bad apple" and has been dealt with "in house."

One bad apple and blame the whole group. Typical of people out there. THAT individual has been dealt with in house. #LoveGays #HappyNewYear

The tweet goes on to say the club loves all members of the LGBT community.

Finnegan loves all members of the LGBT community!! #LGBT

It showed Bruce Jenner on a Wheaties box and Caitlyn Jenner on the front of a box of Fruit Loops.

Inemer says he stands by the skit, calling it a parody.