National Hamburger Day: Are burger restaurants popular on West Coast, Southern US ever opening in Philly?

PHILADELPHIA (WPVI) -- Many people have barbecues on Memorial Day. Coincidentally, or not, the last Monday in May is also National Hamburger Day.

If you aren't grilling your own burger, there are a ton of other options to get one in the area.

There's a BurgerFi in Center City Philadelphia. The lone Zinburger is located in Cherry Hill. A Bareburger popped up on Walnut Street in Center City. You can find a Wahlburgers in Northern Liberties, and reportedly one soon in Atlantic City. Plan a visit to a Cheeburger Cheeburger in either Langhorne or Oaks. Two Freddy's can be found in Delaware and Chester counties.

You can grab a burger at a White Castle in the Lehigh Valley and two in South Jersey. There are three Elevation Burgers in the Pa. suburbs. The Habit Burger Grill has three spots in Pa. & NJ, and there are three Grub Burger Bars in Pennsylvania and Delaware. Within 50 miles of Philly, there are three Steak 'n Shakes and three Fuddruckers.

Five Hardee's restaurants can be found in Willingboro, Burlington County and across Delaware. Shake Shack and Wayback Burgers have both opened seven locations in the Philadelphia area. Nine Smashburgers can be found in Pennsylvania and New Jersey or you can roll up to 12 Sonic Drive-Ins.

Seventeen Red Robins are in close proximity to Philadelphia. Five Guys lists 21 restaurants in the Delaware Valley. Not to mention the hundreds of Burger Kings, Wendy's, and McDonald's locations that cover Pennsylvania, New Jersey, and Delaware.

Just to name a few.

And then of course, all the local hotspots (check Yelp) that can only be found in Center City, other sections of Philly, and the surrounding suburbs, like P'unk Burger on Passyunk, Sketch Burger on Girard Avenue, Old School Burgers & Fries in Willow Grove, Zac's in Delaware County, Burgers Chips And Shakes in Gloucester County, BurgerBarr in Washington Township, NJ, as well as eateries without burger in their name like Village Whiskey, South Philadelphia Tap Room, and Good Dog Bar.

But if you've ever taken a trip to the West Coast or the South, you've found there are even more places to grab a burger. And if you have relatives or friends who live there, they have certainly spoken about these food landmarks.

But what are the chances that these faraway chains will open a location in the Philadelphia area?

There was only way to find out. We asked. 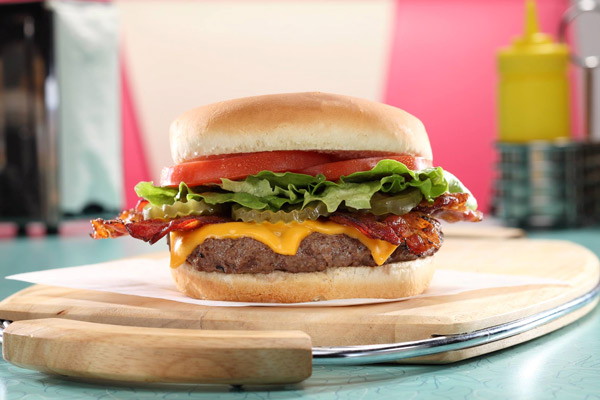 Hwy 55 is billed as the official restaurant of National Hamburger Day.

Kenny Moore opened the first Hwy 55 in a mall in North Carolina in 1991. It actually had a Philly sounding name at first: "Andy's Cheesesteaks & Cheeseburgers." Moore would cook every burger by himself from open to close.

"Hwy 55 has sold the rights to more than 1,000 franchise locations around the world including Montana, West Virginia, Louisiana, Kentucky and southern Indiana and Virginia in the past year. Our hope is to open approximately 25 locations in 2018," Hwy 55 told 6abc.com.

Hwy 55 offers the Five Five Challenge, which sees guests receiving a 55-ounce burger with seven patties and at least four trimmings, fries and 24-ounce drink. If guests can consume it all in 30 minutes, it's free. If a guest is unable to finish the meal in 30 minutes, they have to pay the $29.99.

And, it turns out, there is a local connection to Hwy 55. Bob Shoudt of Royersford, Montgomery County, a former Wing Bowl champion, is taking part in Hwy 55's 2nd Annual World Hamburger Eating. Championship on June 2.

So - will Hwy 55 be opening a Philly location?

"At the moment we have no immediate plans to expand into the Philly/South Jersey area, but you are certainly on our list, and we are accepting franchise applications in the region in hopes of expansion," Hwy 55 told 6abc.com.

So you have plenty of time to get yourself ready for the Five Five Challenge if and when one does open in Philly.

Jack in the Box 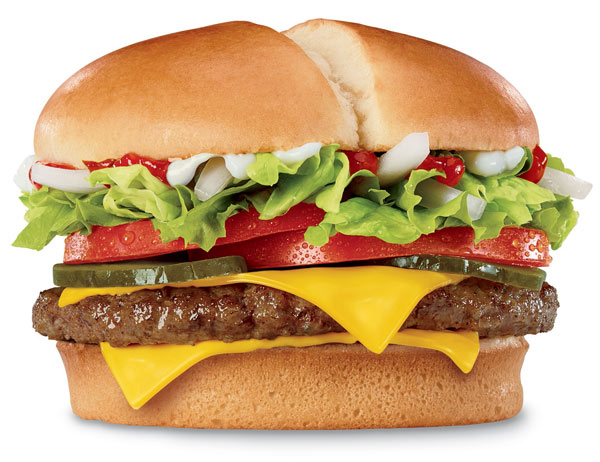 Jack in the Box

Jack in the Box has 2,200 restaurants in 21 states (Arizona, California, Colorado, Hawaii, Idaho, Illinois, Indiana, Kansas, Louisiana, Missouri, Nevada, New Mexico, North Carolina, Ohio, Oklahoma, Oregon, South Carolina, Tennessee, Texas, Utah, and Washington) and Guam, but not one in the Delaware Valley- though there used to be.

That's why you'll never see Jack Box, the company's spokesman, pop up on your TV while watching Action News. Sometimes, a rare Jack in the Box ad does appear during national programming, which makes us wonder - what if?

The first Jack in the Box opened in San Diego, California by Robert O. Peterson in 1951. A hamburger at the time cost 18 cents.

Jack in the Box is known for its Jumbo Jack burger, described like this: "When you pick up the Jumbo Jack-made with a 100% beef patty topped with hand leafed lettuce, tomato, pickles, chopped onions, and real mayonnaise on a buttery bakery bun-your arms will tremble. And your mouth will open. It's the delicious type of workout."

So - will we ever see a Jack in the Box in the Philadelphia area?

Answer: Not in the foreseeable future.

"Unfortunately, we do not have any near-term plans to expand into those markets. We know we have fans there, and we're really sorry to disappoint them," Jack in the Box told 6abc.com. "Lots of factors influence our decision on expanding into new markets - like the level of existing brand awareness. But we would also need an infrastructure to support the restaurants. And to maximize efficiencies, we'd also need to open multiple locations, which would require a significant capital investment."

So if you want to see Jack for the time being, you'd better hit the road. 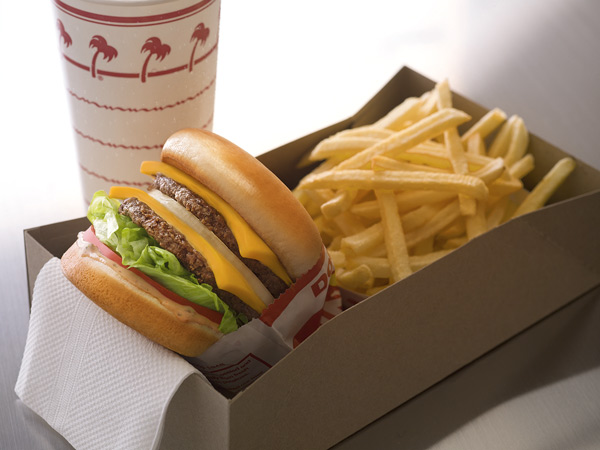 In-N-Out Burger got its start in 1948 as California's first drive-thru hamburger stand. Founder Harry Snyder worked in his garage to create the speaker system so customers wouldn't have to leave their cars.

The chain is known for its arrow logo, which points to locations in California, Nevada, Arizona, Utah, Texas, and Oregon.

In-N-Out's most famous offering is its Double-Double which the restaurants breaks down to be made up of "toasted buns, two American cheese slices, two 100% American beef patties, onions, lettuce, spread (our own recipe, unchanged since 1948), and tomato."

So - will consumers ever be able to order a Double-Double at an In-N-Out in Philly?

Answer: No plans yet.

"While we hope to make it to Pennsylvania someday, our slow growth plans will prevent us from getting there in the near-term future. Philadelphia is definitely a great city filled with many opportunities, but it is just too far away from our distribution centers and patty production facilities," In-N-Out Burger told 6abc.com.

"We do make every hamburger patty ourselves at our own facilities in Baldwin Park, CA, Lathrop, CA, and Dallas, TX. We also deliver those fresh patties (along with all fresh produce, buns, etc.) to our restaurants ourselves using our own delivery vehicles. Nothing is ever frozen at In-N-Out Burger and our current growth plans are limited by the distance we can travel from our patty production and distribution facilities while maintaining our freshness standards," In-N-Out said.

So if you want a meal right now at In-N-Out Burger, you'll have to journey west. On the double. 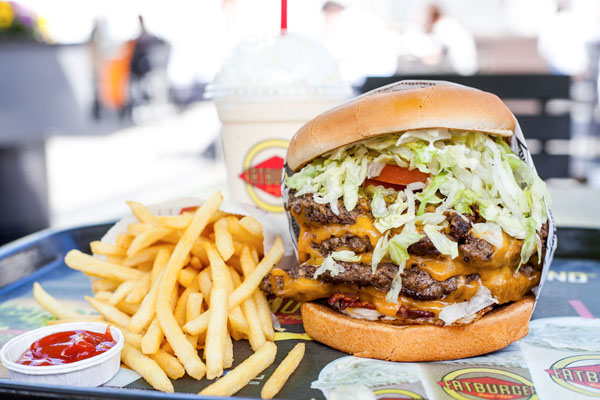 With locations in California, Arizona, Colorado, Nevada, and Washington State, Fatburger is pretty far if you want to grab one of their burgers after a Phillies game.

Fatburger was founded by Lovie Yancey in 1952. She coined the restaurant name because "I wanted to get across the idea of a big burger with everything on it . . . a meal in itself."

They offer such choices as The XXXL Fatburger - 'three 1/2 lb patties of fresh, never frozen lean beef. Served on our world famous sponge dough bun' - and the Impossible Burger - 'a delicious burger made entirely from plants for people who love meat.'

"Every meal is cooked-to-order, just the way you want it, every time. Using only the freshest ingredients, and traditional cooking methods (you won't find heat-lamps or microwaves in our stands), we're best known for our fresh-never-frozen, lean-beef, chicken, turkey and veggie burgers & sandwiches, our hand-scooped, real ice cream milkshakes, homemade-from-scratch onion rings and build-your-own-burger experience," they said.

So - will Fatburger be heading to the Philadelphia area?

"We're happy to share with you exclusively that we are actually planning to open a Fatburger in the Cherry Hill Mall," Fatburger told 6abc.com.

Fatburger says there is no solid date at the moment, but it is in the planning stages. 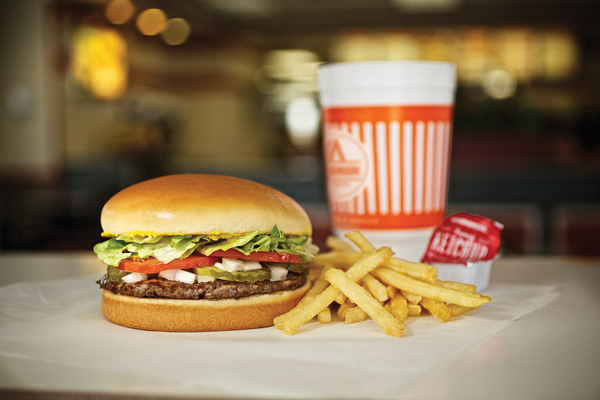 "He had a simple goal: to serve a burger so big it took two hands to hold and so good that with one bite customers would say, "What a burger!" the restaurant said.

Dobson died in a plane accident in 1967 and his wife Grace took over the role of chair of the growing Whataburger operation. Their children now help run the business, where employees are called Family Members.

Whataburger is famous for its orange-and-white-striped A-Frame restaurants, its Fancy Ketchup, and of course, its burgers.

And it all began with the original Whataburger, described as "fresh, never frozen, 100% pure American beef, grilled and seasoned to perfection. Every Whataburger comes with mustard, lettuce, tomatoes, pickles and diced onions on a toasted five-inch bun. Or just like you like it."

Which means, how many Whataburgers are in the Delaware Valley? Not a one.

So - will Whataburger be making the journey up north to the Philadelphia area?

Answer: Not physically, but there's an online option.

"We love hearing that we have so many fans in Philadelphia. While we're not currently pursuing any locations in Pennsylvania, we're proud to offer exceptional food and service at our more than 820 locations across 10 states. In fact, fans and customers all over the world can enjoy the unique bold flavors that are found in Whataburger restaurants in their very own homes. Whataburger's signature sauces, grocery products and popular retail items are available for purchase on Whataburger.com. We hope our Philadelphia fans will think of us the next time they're in one of our markets or shopping online," Whataburger Corporate Communications told 6abc.com.

So, for the time being, you can order from Whataburger and not worry about parking. 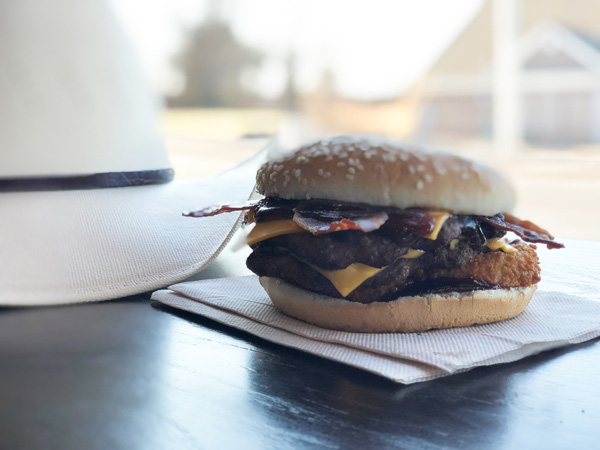 In 1941, Carl Karcher and his wife Margaret purchased a hot dog cart by borrowing $311 on their Plymouth automobile and $15 in savings. In less than five years, Carl's Drive-In Barbecue opened - with hamburgers on the menu. Carl's Jr. would officially open for business in the 1950s.

But if you are traveling in Willingboro, New Jersey or parts of Delaware, you may have come across Carl's Jr.'s iconic Happy Star mascot. How can that be? That's because the parent company of Carl's Jr., CKE Restaurants, also owns Hardee's. The company purchased Hardee's in the 1990s.

The two restaurants have a similar look with a slightly different menu, both offering what they call Thickburgers.

So - will the Philly area ever get a Carl's Jr.?

Answer: We are a Hardee's area, so nothing planned.

"For the areas you mentioned, those would be Hardee's markets - we have Hardee's locations in the Philadelphia DMA in New Jersey and Delaware. We don't have anything new on the immediate horizon, but we're constantly looking for new site opportunities with our franchisee OTAC in Delaware," Carl's Jr. told 6abc.com.

So if you want a taste of Carl's Jr. in the Delaware Valley, you'll have to visit a Hardee's for now.

The results: One restaurant out of six.

And now you have another topic to discuss at your family's barbecue - or on your just planned road trip to all these distant burger destinations.