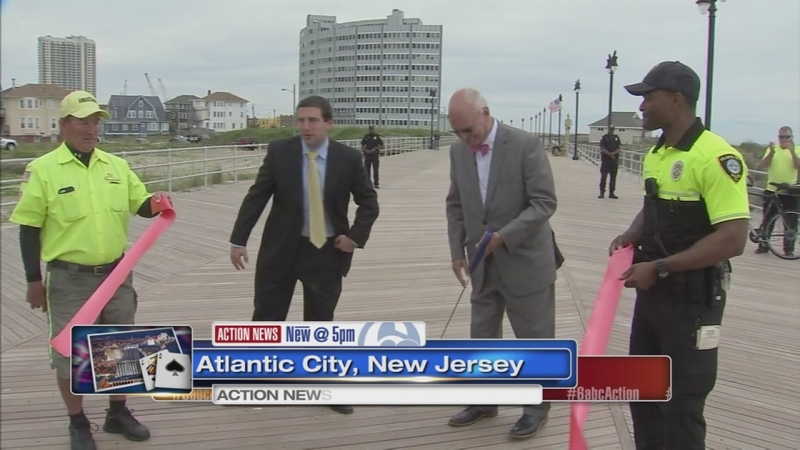 ATLANTIC CITY, N.J. (WPVI) -- With the snip of a ribbon Mayor Don Guardian officially re-opened a newly rebuilt section of Atlantic City's iconic boardwalk that stretches from the former Revel Hotel to Oriental Avenue at the Absecon Inlet.

"You're seeing a lot of excitement at this and for the first time. Certainly as the Taj and Showboat and Revel all closed, this end of town died. So now there's a little bit of life there," Atlantic City Mayor Don Guardian said.

"This is so exciting for Atlantic City because basically the famous boardwalk is America's front porch to fun," Absecon Lighthouse Director Jean Muchanic said.

Jean Muchanic is my younger sister, who runs the Absecon lighthouse a couple blocks off the boardwalk. She's hoping the new boards will bring more visitors to the local landmark.

"The job they are doing on the boards is just phenomenal. It's so flat and easy to ride. That's what makes it really nice," Vince Vallone of Hopbottom, Pa. said.

"We thought a few blocks back that it was the end and we got down here and it was wow, it goes even further. That was nice," Bobbie Vallone of Hopbottom, Pa. said.

Construction is still underway on the final $40 million phase of the boardwalk rebuild along the Absecon inlet.

A protective rock seawall is being built and a new boardwalk will follow. When it's finished you'll be able to bike all the way from Margate to Gardner's Basin.

Russ Cipolla, Atlantic City Engineer said, "The rock wall will dissipate the water and it will stop it. The bulk heading and seawall will stop it even more."

Tim Brennan of Atlantic City said, "I remember the storms washing this area out, and it's just I'm impressed with the level of Engineering that they're putting into it."

Officials hope it will spur development and draw more people to inlet attractions.