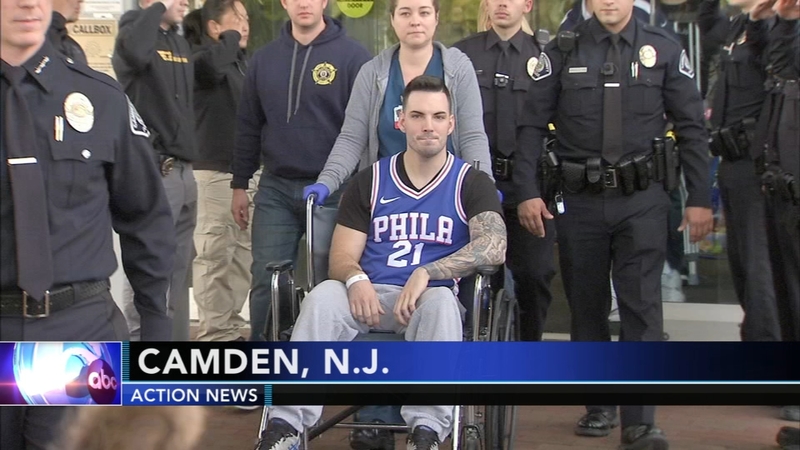 CAMDEN, N.J. (WPVI) -- Camden County Police Officer Patrick O'Hanlon was released from the hospital Saturday after being shot in the leg at point-blank range.

O'Hanlon left Cooper Hospital accompanied by his family and a number of fellow officers who stood saluting him.

He gave a thumbs up, dressed comfortably in his Sixers jersey, and made his way home from Cooper University Hospital.

His father Joe O'Hanlon spoke to Action News to give a quick update.

"He's sore, a little swollen, but in good spirits and wants to go home to get in his own bed and relax," he said.
The 21-year-old officer was shot at point-blank range, following a short foot chase in the city's Centerville section Wednesday night.

Police say around 10 p.m. he approached three men believed to be suspicious and one began to flee.

But O'Hanlon caught up to him and that's when the suspect pulled out a gun and fired at point blank range.

Chief Scott Thompson of the Camden County Police Department said, "Were extremely fortunate the way this situation unfolded, that the gun jammed and the suspect was not able to finish him off like he tried to do."

O'Hanlon was shot in the leg.

"You're talking about an individual that's 19-years-old of age, and already has 3 felony convictions and 10 arrests. This individual does not belong walking around society," said Chief Thompson.

He also said, O'Hanlon was still able to apprehend and hold Mahan until back up arrived.

"He got shot at point blank range. The individual then tried to shoot him in the face and he was able to remove the gun and held on to him until backup arrived," Chief Thompson said.

It was a team effort in getting O'Hanlon to the hospital and now back home today.

His father Joe says he wants to thank everyone, especially the hospital staff that his son is going to be okay.

"What more can you ask for, he's coming home with us and he'll get well and he'll be back," he said.

The good news is according to his father, Officer O'Hanlon has every intention of returning to work as soon as possible.

Mahan has been charged with attempted murder, aggravated assault, and weapons offenses. He was taken to the Camden County Correctional Facility pending a pretrial detention hearing.

RELATED: Camden County police reach out to the community where an officer was shot.
EMBED More News Videos