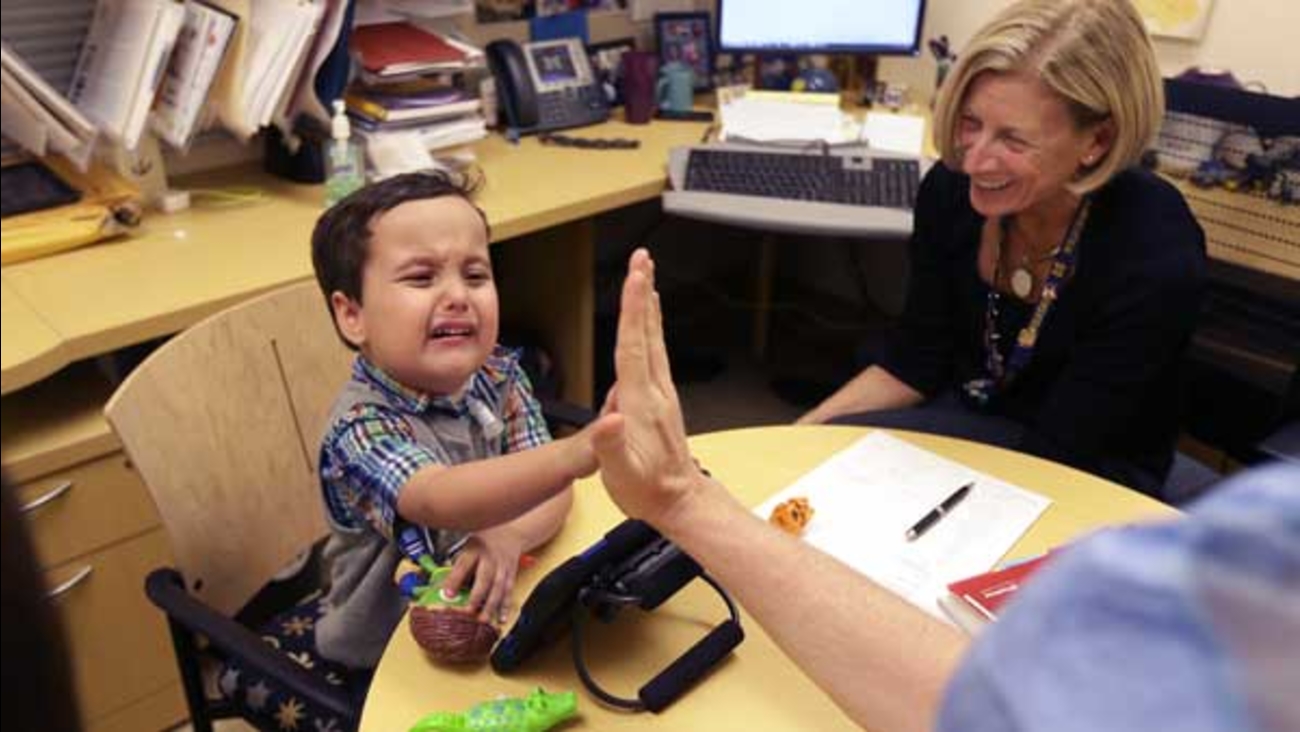 In a photo from Thursday, Oct. 22, 2015, in Ann Arbor, Mich., Grant Hasse cries as he receives a high-five from Dr. Glenn Green. (AP Photo/Carlos Osorio)

Grant Hasse was born with two very rare conditions - one that's usually fatal, the other that should have left him unable to talk.

But at almost 4 years old, he's a healthy bundle of energy after three dozen surgeries, including an innovative operation to create a new voice box.

Doctors discovered before he was born that Grant's upper airway was completely blocked, meaning that at birth, he'd be unable to breathe. Even with quick intervention, doctors said his survival chances were extremely slim.

Only about 50 people born with the condition worldwide have survived. Even fewer are born with no vocal cords - an anomaly doctors didn't discover until after Grant was born.

What helped save his life was an operation to insert a breathing tube while he was still partly in the womb.

The Michigan boy is the first child for Andrea Hasse, a school principal, and her husband, Tadd, a carpenter. During a routine ultrasound when she was 18 weeks pregnant, they learned that something was "undeniably wrong," she said.

The images showed that Grant's lungs seemed to be nearly fully developed, yet he wasn't due to be born for another five months. Cartilage blockage in his upper airway prevented his body from expelling fluid, causing his lungs to swell.

"It was very earth-shattering for us," Andrea Hasse said. "We were given a 1 to 3 percent chance of survival. We clung to that 3 percent."

They were referred to specialists at the University of Michigan in Ann Arbor, about an hour from their Clinton Township home.

Because of the increasing fluid, her pregnancy became dangerous and doctors performed a cesarean section. Grant was just 27 weeks old and weighed less than 3 pounds.

Dr. Glenn Green, a pediatric airway surgeon at the university's C.S. Mott Children's Hospital, performed Grant's first surgery during the C-section. An opening to his windpipe below the blockage was created in the baby's neck as it protruded from his mother's belly. A breathing tube was inserted, and a handheld ventilator was attached as he was pulled from the womb and transferred to a breathing machine.

The tiny preemie spent four months in the hospital before being sent home with a ventilator and nursing care. Additional surgeries were postponed while he gained strength.

When Grant was around 1, during an operation to clear his throat, doctors learned he faced yet another hurdle - an undeveloped voice box and no vocal cords.

In a photo from Nov. 9, 2015, in Clinton Township, Mich., Andrea Hasse reads to her son Grant Hasse.

Green had reconstructed airways in premature babies whose voice boxes were damaged from breathing tubes. So he decide to take that a step further and refashion a voice box and vocal cords for Grant, using the boy's own tissue.

It involved two major operations, the last in July 2014. The surgeon created two cord-like structures from nearby muscle, and used a graft from Grant's rib to separate them, allowing them to vibrate like real vocal cords to create sound.

A speech therapist helped teach Grant how to form his lips and make puffs of air to create sounds, including "h'' and "p." After one speech therapy session in June, he started making letter sounds in the car. As soon as they got home, Grant blurted out "hop."

"We couldn't believe it!" Andrea Hasse said. "We looked at each other stunned and Grant acted like it was no big deal!"

Now he can say more than a dozen words, including "mama," ''dada," and "Peppa" - the name of his favorite cartoon pig.

Sometimes clearing the blocked airway and inserting a tube for breathing is all that is done, and some patients figure out a way to speak without vocal cords by "closing different parts of their throat to create a sound," said Ida, who was not involved in the boy's treatment.

The extensive surgery to refashion a voice box is novel, and the fact that the vocal cords are working "is pretty impressive," Ida said.

In Wisconsin, researchers are experimenting with growing bio-engineered tissue to create vocal cords, for people whose throats are damaged by cancer or other conditions, and last week reported preliminary success using lab animals.

Grant turns 4 on Saturday, and Green, the Michigan surgeon, gets excited talking about the little boy's progress.

"I didn't know what to expect for him," Green said. "But he's figured out how to use it."

Green and Grant's parents think Grant will learn to become fully vocal, though his voice likely will always sound raspy. That seems pretty trivial, after all he's been through.