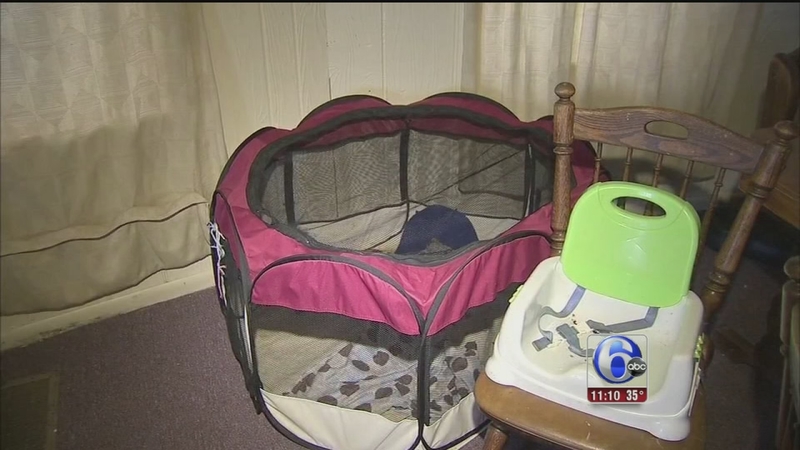 DARBY BOROUGH, Pa. (WPVI) -- A one-month-old baby is hospitalized after losing up to 25 percent of her face when she was attacked by ferrets inside her home.

The incident happened Thursday in the 300 block of Poplar Street in Darby Borough.

The child, named Skyy Isabelle Fraime, was placed in her car seat and then left on the floor. Skyy's mother, Jessica Benales, then went upstairs to use the bathroom.

During the time the mother was away, two of the family's three ferrets escaped their cloth-like cage.

The girl's father, Burnie Fraime, tells us he was asleep upstairs when the tragedy unfolded.

When he and Benales came downstairs, the baby was screaming and they found the ferrets had eaten away 25 percent of her face.

Skyy suffered severe injuries to her lips and nose and other parts of her face.

Fraime tells us, "I went over to grab the baby, and then the baby's... half the face was messed up from the ferret. So I called 911 immediately."

The child was rushed to the Children's Hospital of Philadelphia where she underwent life-saving surgery.

Her recovery will be a long process, requiring many more surgeries in the years ahead.

Chief Smythe says the household, which includes a total of five young children - all under the age of 5, is in crisis.

The four other children were put in the care of other family members.

"I'm not a CYS person. I'm a cop. I've been one for 45 years, and this is the most horrific thing I've seen happen to a child in 45 years in this town," said Smythe.

He says the family has been clients of Delaware County Child & Youth Services before this tragedy.

Authorities call the living conditions inside the home 'deplorable.' All the animals were removed including the ferrets, which were euthanized.

Owning ferrets, mammals in the same family as the weasel, is legal in Pennsylvania.

Fraime says in the year that they owned the ferrets, they've never had a problem with them.

Meanwhile police are recommending charges against the parents. However, the Delaware County district attorney has not yet made a decision.
Related topics:
darby boroughpa. newschild injuredanimal attack
Copyright © 2021 WPVI-TV. All Rights Reserved.
More Videos
From CNN Newsource affiliates
TOP STORIES