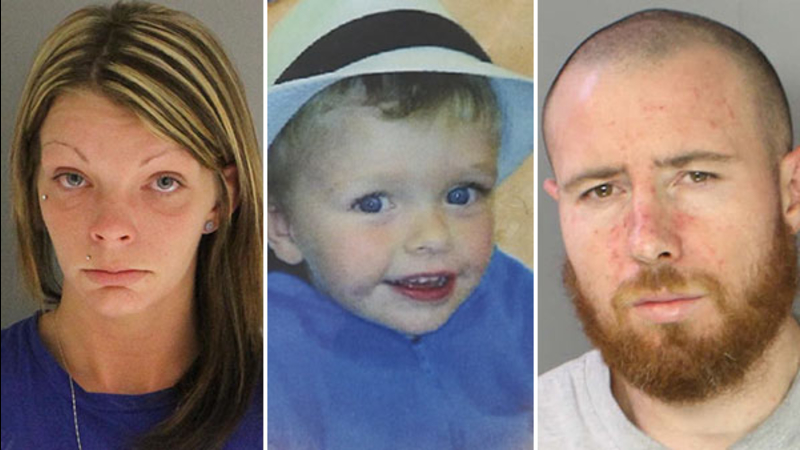 NORWOOD (WPVI) -- A Delaware County mother and her boyfriend are facing murder charges in the death of her 2-year-old son.

30-year-old Shannon Matthews and her boyfriend, 31-year-old Daniel Grafton, are both charged with multiple counts in the death of Matthews' son, Mason Hunt.

"We believe both played an active role in the horrific death of this young boy," said Jack Whelan, Delaware County District Attorney.

It was back on February 3 that police and paramedics rushed to the office of Dr. Patricia Sutton on the 400 block of Chester Pike in Norwood for an unresponsive child.

Grafton, who lived with his girlfriend in the apartment above the office, took the child there claiming he found him unconscious face-down in the bathtub.

But investigators say it was clear from the very beginning that the child had been badly beaten, which was confirmed by the medical examiner's office.

"This child had bruising all over his body - his face, his back, his arms, his legs. His genitals were even bruised," said Whelan.

Mason was transported to the hospital, where he was pronounced dead.

Matthews told authorities that she left Grafton to care for the boy while she went to work at 10:45 that morning at the doctor's office.

She said she returned to the apartment for a few minutes to drop off snacks for her son and Grafton told her Mason was in the bath tub.

An hour later, Grafton rushed into the doctor's office carrying the unconscious boy.

Matthews and Grafton were already being watched by CYS since January after the child ended up in the hospital covered head to toe in season salt.

Grafton tried to claim the child did it himself, but authorities didn't buy it.

A few days before Mason's death, a case worker tried to check on the boy but Grafton would not answer the door - fearing that the case worker would see the bruises and call police.

The pair are both charged with murder of the third degree, aggravated assault, endangering the welfare of children, criminal conspiracy and involuntary manslaughter and other related charges.

They were arraigned Friday morning and remain in custody without bail.