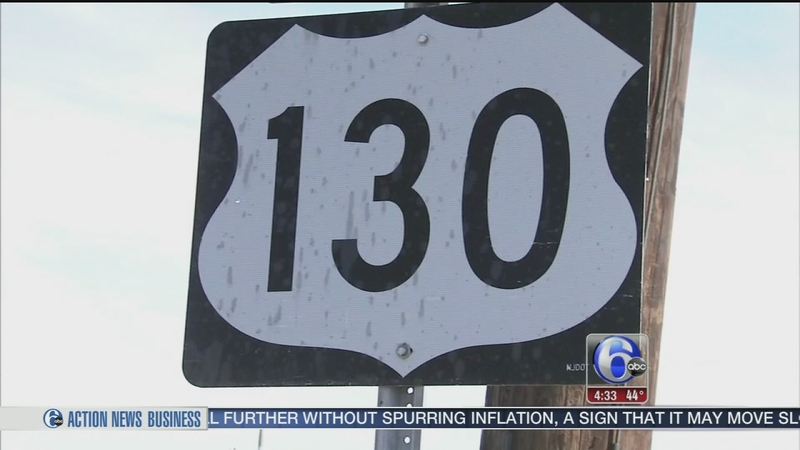 EDGEWATER PARK, N.J. (WPVI) -- For the fifth year in a row the nonprofit Tri-State Transportation Campaign has named Route 130 the most dangerous road in New Jersey for pedestrians.

Earlier this month in Edgewater Park a man was killed crossing the busy highway, and last night in Delran another was critically injured.

Chief Gene DiFilippo of Edgewater Park Police says, "They think the vehicles are going slower and they try to make it across and next thing they know they haven't made it. We've seen people carrying their children across the barricades, we've seen people lifting their child over to the other side while they jump."

Chief DeFilippo says people won't walk to the nearest light to cross Route 130, so they cut across six lanes of highway, either hopping over or walking through breaks in the concrete barriers.

Anthony Harvey of Germantown explained to us his technique, saying, "Make sure there ain't no cars coming then I run jump over and keep moving over to the other side."

Harvey says he's done it to save time late at night when most of these pedestrian accidents happen.

He says, "It's too much extra to walk all the way down there and cross over there. You got to go all the way back this way and get on the bus."

At City Select Auto Sales in Edgewater Park they watch nervously as people regularly go back-and-forth through the median to Willingboro Town Center across the street.

Aquila Vereen from City Select Auto Sales tells us, "Especially when they get to the middle and they stop and then a car could just dart out. Then you never know what happens. Like, I had a family friend of mine coming from church and got killed."

Jose Reyes of Camden says, "I worry something's going to happen. You know, I've seen pregnant women crossing. They really need a crosswalk, it's really dangerous. It's necessary. I don't understand it, it's a no-brainer."

The Tri-State Transportation Campaign has called for more crosswalks and sidewalks along Route 130, along with islands in the medians where pedestrians can stand safely.