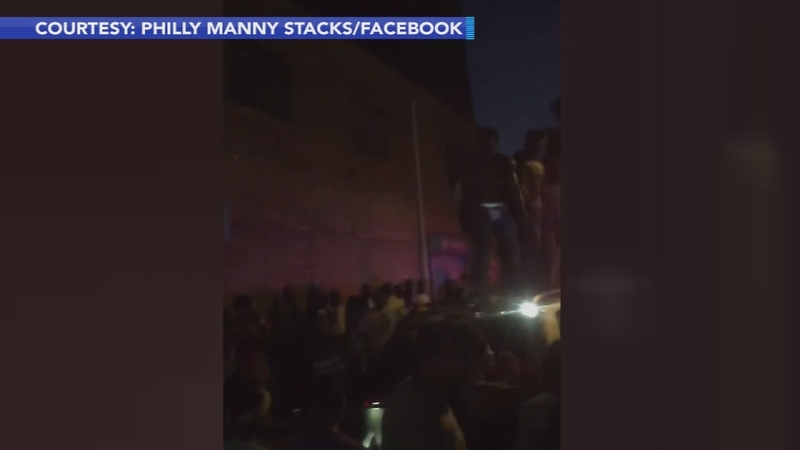 GERMANTOWN (WPVI) -- There are a lot of different opinions about what occurred Sunday night in the Germantown section of Philadelphia.

Some neighbors say they saw some of the hundreds of young people on hand throwing bottles at police and being disrespectful. The teens who coordinated a party in the area tell Action News there was nothing violent; they say it was just a cookout advertised on social media that attracted far too many of their friends.

Watch Action Cam video from Germantown after police responded to reports of an out-of-control mob of teenagers.

Videos posted to Facebook appear to show a chaotic scene in the 1100 of East Chelten Avenue.

Some who organized and attended the gathering told us it was just a big crowd, but nothing violent.

"We just had a little cookout for a little get-together around our way. It wasn't really a flash mob kind of thing, it was just like all of our friends coming together to have a cookout. But a lot of people came out for us," Jahmir Williams of Germantown said.

The cookout at the Lonnie Young Rec Center playground was organized via social media. Police estimated some 500 young people showed up.

"This was something that was generated from social media. Once again, social media can be a great thing, but there are certain perils that come with it," Philadelphia Police Commissioner Richard Ross said.

Organizers tell Action News they did not have a permit and police shut the event down.

"The cops came and shut it down. When the cops shut it down, people got mad. So we had to stand out here," Alex Williams told Action News while standing on a Germantown corner.

Surveillance video shows some of the young people gathering on surrounding streets.

Police asked a nearby restaurant to close to try to get the crowd to go home.

One woman said the situation got way out of hand and she witnessed bottles being thrown at officers.

Laverne Preston said there wouldn't have been any problems had the police just allowed to kids to carry on with the cookout.

"They were doing fine. They were having a good time. They were only being teenagers. Once the cops came with all these different cars, running them all over the place, that's when it got wild," Preston said.

Police made no arrests and nobody was hurt.

The young people who were involved with organizing the event say they plan to try again, but next time with the proper permits and supervision.