They now have two first-rounders in the 2023 draft, which is expected to boast a much better QB class than the '22 group.
ESPN
By Tim McManus ESPN Staff Writer 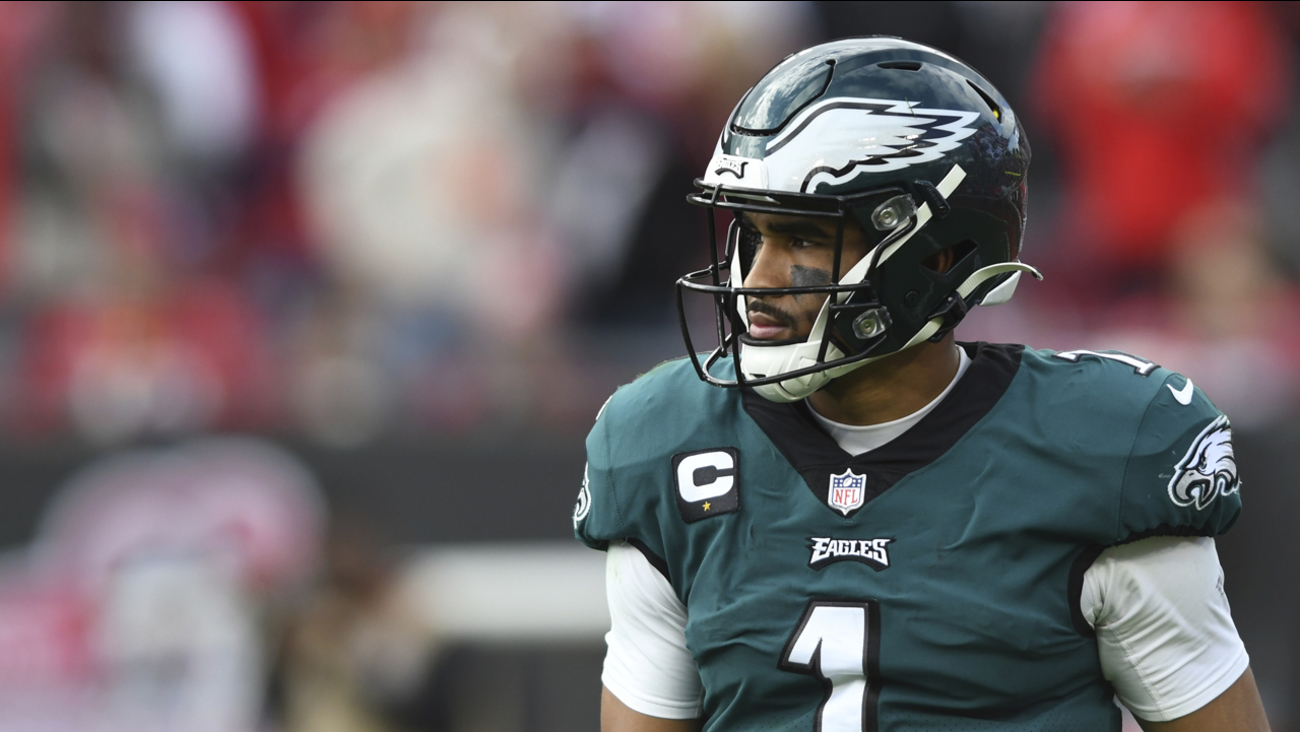 PHILADELPHIA -- The Eagles' actions this offseason continue to suggest that while they like quarterback Jalen Hurts, they're not married to him as the long-term starter.

Further evidence was submitted Monday when they agreed to trade two of their first-rounders in April's draft (Nos. 16 and 19) along with the 194th overall pick to the New Orleans Saints in exchange for picks Nos. 18, 101 and 237 this year; a 2023 first-round pick; and a 2024 second-round pick.


They now have two first-rounders in the 2023 draft, which is expected to boast a much better QB class than the '22 group. It's not a stretch to say that with the move, Hurts is officially on the clock.

The trade is not just about the quarterback position. It's in part about spreading their assets out. Drafting three players in the first round, and paying them concurrently, isn't ideal from a bookkeeping perspective. The resources in this scenario are more staggered, and there are more of them, as they picked up first- or second-day picks in each of the next three drafts. According to ESPN's draft pick value calculator, the Eagles got the much better side of the deal if 2022 and 2023 picks were treated with equal value.

Bottom line, it makes sense from a macro perspective, which is exactly how the Eagles' brass is viewing things this offseason.

"I look at team building. And that's what we're doing right now, we're building," general manager Howie Roseman told reporters last week at the NFL owners meetings. "We're not in the go-for-it situation, all-in situation. We have too many resources. We have too many good young players to be like that."

Still, it's hard not to view this as the Eagles hedging their bets at quarterback. That's not to say they don't like Hurts, who threw for over 3,100 yards with 16 touchdowns and nine interceptions last year, led all quarterbacks in rushing yards (784) and rushing touchdowns (10), and helped Philadelphia make an unexpected trip to the postseason in his first year as the starter. They very much do.

"We have a young, 23-year-old, playoff QB who gets better every year in college and in the pros," Eagles owner Jeffrey Lurie said last week. "He's had, really, one full year. No one knows where that's going to end up, but I think what you do know is you have a guy that is incredibly dedicated, excellent leader of men. Players around him gravitate to him. He will do anything and everything to get better and work on every weakness he has to try to maximize every strength he has. And that's why we're committed to Jalen at age 23. Who knows what the future holds, right?"

That last sentence seemed to cancel the previous one out, or at least amend the thought to committed to Jalen ... for now.


Lurie went on to talk about the idea of an "automatic franchise quarterback" and how such a player is "almost nonexistent." It was strange to hear him talking about a franchise quarterback as being almost mythical after spending so much time and energy chasing after one over the past couple of decades.

The search has continued in recent months, with the Eagles taking a serious look at Deshaun Watson and doing their homework on Russell Wilson. Lurie would only acknowledge that they do due diligence on every player who becomes available.

But it was more than that.

It's hard to tell exactly how good Hurts is going to be in this league. The intangibles are there. He's highly motivated and a skilled playmaker. He elevated his completion rate from 52% as a rookie to 61.3% last season, but that still ranked just 26th among qualifying quarterbacks. Can he develop into a top-tier signal-caller by becoming a much more consistent passer? As Lurie said, "Who knows what the future holds, right?"

So they're preparing for a number of outcomes. If Hurts isn't the answer, they're armed with a pair of first-rounders in a 2023 draft that is expected to include Ohio State's C.J. Stroud and Alabama's Bryce Young. If Hurts is the answer, they can use those assets to continue to build around him.