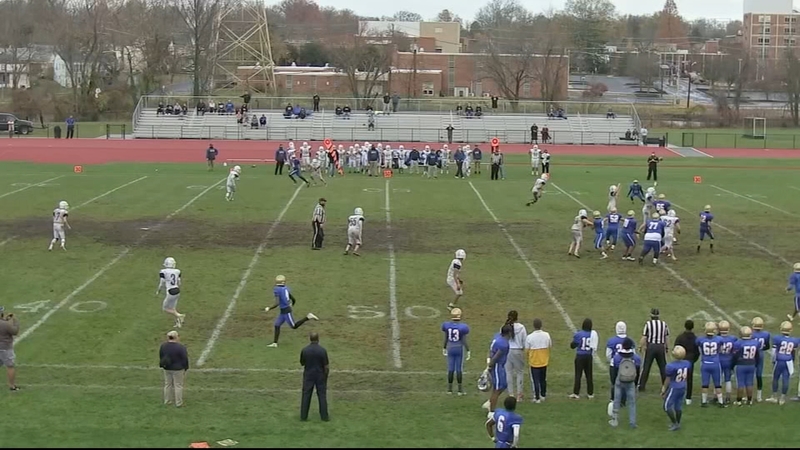 WOODBURY, New Jersey (WPVI) -- For a lot of families, football is ingrained into their Thanksgiving traditions, and many still went on despite the pandemic.

The smaller crowd made as much noise as they could, watching the traditional Thanksgiving Day game at Woodbury High School against Gateway.

"Right now, you see it's like 10 people here. Usually, it's filled on both sides, but now it's like 10-15 people here because of the governor's order," said Woodbury parent Angelique Hayes-Smith.

This week, new outdoor gathering restrictions took effect in New Jersey, limiting crowd size to 150, down from 500 due to increasing COVID-19 numbers.

The players say the atmosphere was strange at first.

"But as the game went on we got used to it and started to have fun with the team and not worry about the crowd," said senior Javon Solomon of Woodbury.

Woodbury won their final game 37-10 -- a great way to end a shortened and strange season.

"We were shut down for two weeks because of COVID and also had a bye week before that. We came off of that and we had two days to prepare for a game the following Thursday. So it was just like up and down," said Coach Anthony Reagan of Woodbury High School.

At Highland Regional High School, the Thanksgiving game against rival Triton went on with precautions.

"On a normal year, this place is packed. There's fans in the stands, fans lined around the stadium," said Mike Berger, the athletic director at Highland Regional High School.

"We had our senior ceremony before the game and it was just odd to hear because all the parents were out there with our sons, so there was no one in the stands cheering. But we were just so thankful that they were able to have it," said Highland football parent Susan Hagan.

Students were thankful to have a final game on the field and on the sidelines.

"We're making the best out of it, and I'm just happy to be here with my friends," said Highland senior cheerleader Jordan Wilson.

The Highland/Triton game ended early because of a fight on the field. The final score of that game was 28-0 Highland.
Report a correction or typo
Related topics:
sportsnew jerseyaction news sportscoronavirushigh school sports
Copyright © 2022 WPVI-TV. All Rights Reserved.
ACTION NEWS SPORTS
Eagles have a loaded roster, but will QB hold them back?
Philadelphia Eagles release 2022 schedule
Joel Embiid vs. Nikola Jokić: NBA MVP voters only got it half right
After a splashy offseason, it's a great time to be an Eagles fan
TOP STORIES
30th St. Station worker recalls stabbing: 'I sprayed him with Windex'
Mom hears late son's heartbeat in 14-year-old boy for 1st time
US to release monkeypox vaccine from national stockpile: CDC
McCormick sues over counting mail ballots in Pa. Senate race
NFL QB Dwayne Haskins legally drunk when he was hit, autopsy shows
3 teens injured in shooting near school in Tioga-Nicetown
Man stabbed in Northern Liberties, police say
Show More
AccuWeather: On The Cool Side
Bruce Springsteen and E Street Band to tour in US, Europe
Philly musician pays tribute to Korean-American heritage
Chickie's & Pete's to pay your tolls on AC Expressway
Fuel saving tips ahead of Memorial Day weekend travel
More TOP STORIES News