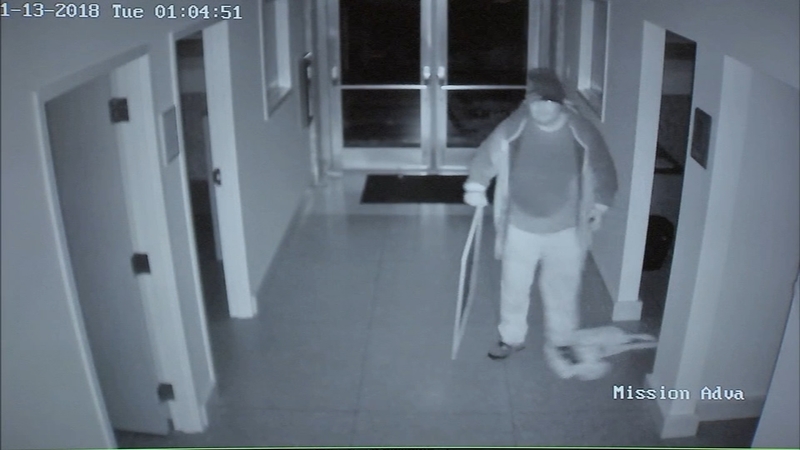 MALVERN, Pa. (WPVI) -- Police are trying to track down the burglar who broke into a Chester County building while nuns were sleeping inside.

The theft happened around 1 a.m. at the Villa Maria House of Students in Malvern, Pa. on November 13th.

The building has offices but is also a residence for the Sisters of the Immaculate Heart of Mary.

Police say it wasn't until someone reviewed the surveillance video that they knew they had been burglarized.

"When they saw this person, this man wandering through - virtually - their home for almost two hours, it's indescribable," said Det. Patricia Doyle of the East Whitland Police Department. "Some of them are still really, really shaken."

Have you seen him?? @eastwhiteland Police investigating a burglary earlier this month at the Villa Maria House of Studies. The suspect stole about $7,000. Nuns were sleeping in a residential area of the building at the time. Call police if you have info. Story @6abc at 4&6. pic.twitter.com/NZl4eo8t8y

The unholy act was committed while about 50 nuns were asleep in a residential area upstairs in the building.

Thankfully they were not hurt, but this heartless criminal got away with $7,000 in cash and another $2,000 in stamps.

"It is devastating for everybody and really, really scary," said Det. Doyle.

The suspect was caught on camera snooping around the building. At one point he was seen holding a window screen and wiping down the floor.

Police say the screen is from the window where he broke in, and they believe he was wiping down the floor to get rid of his footprints.

"We did dust for fingerprints. We didn't have very good luck with that so we are appealing to the community and we are hoping someone recognizes this man," said Doyle.