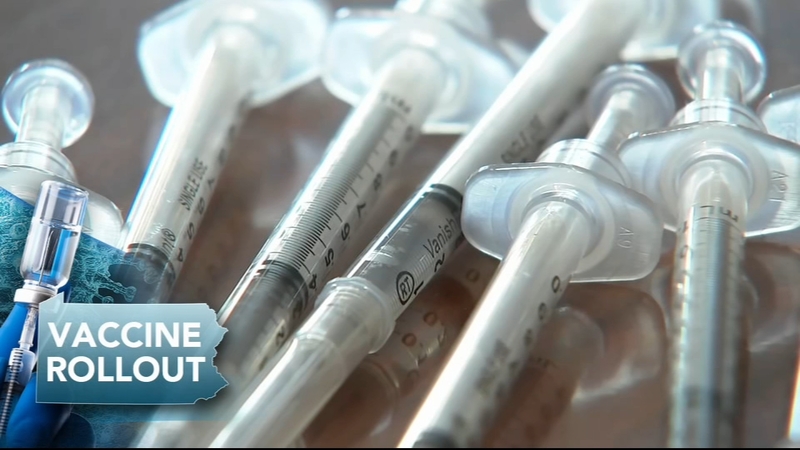 The City of Philadelphia, which has a separate vaccine jurisdiction from the rest of Pennsylvania, announced on Tuesday it is moving to Phase 1b, which expands access to:

- Those who live and work in congregate settings

- People with certain high-risk medical conditions, including cancer, chronic kidney disease, diabetes mellitus, and those under care for organ transplantation

City of Philadelphia has different guidelines. Vaccine only expanding to people age 75 and up and those with high risk conditions. There is no direct sign up. City website will roll out later in the week for you to “show your interest.” @6abc

However, Health Commissioner Dr. Thomas Farley warned that due to limited availability, some residents who fit the criteria may have to wait before receiving the vaccine.

Unvaccinated healthcare workers who were prioritized in Phase 1a are still encouraged to get their vaccine as soon as possible.

The annoucement came after the city confirmed the total number of people infected with COVID-19 has surpassed 100,000.

Dr. Farley says the city has vaccinated almost all the hospital healthcare workers. He says the age requirement is different in the city compared to the suburbs, where it's now 65, because more city residents are at high risk with health conditions.

"We want to make sure they have early access to vaccine and somebody who is 65 and healthy maybe shouldn't be in front of them in line," said Farley.

Farley says this will allow an additional 223,000 people to be vaccinated. But he acknowledges there has been some confusion regarding where people can sign up for the vaccine.

Philadelphia city officials are expanding eligibility for the COVID-19 vaccine.

For the rest of Pennsylvania, officials expanded the eligibility for the COVID-19 vaccine to include people age 65 and over as well as younger people with serious health conditions that put them at higher risk, state health officials announced Tuesday.

The Health Department said its updated coronavirus vaccine plan tracks recommendations from the federal government, but it was uncertain how the expanded rollout would work given the slow pace of vaccinations so far and limitations on supplies.

"We are well aware we don't have enough vaccine to meet the demand at this point," Cindy Findley, a deputy health secretary, said at a media briefing.

The state had been directing the COVID-19 vaccine to health care workers and residents of long-term care facilities, a process that continues.

Tuesday's announcement adds to the initial rollout of Phase 1A people aged 65 and older, and those between the ages of 16 and 64 with a range of health conditions, including cancer and diabetes, as well as pregnant women, smokers and clinically obese people.

According to the Pennsylvania Department of Health on Tuesday, the vaccine is currently being distributed to:

The department has posted a map which lists providers who have received the vaccine.

The major expansion came amid word that the state's top health official, Dr. Rachel Levine, is President-elect Joe Biden's pick to be assistant secretary of health.

Levine became a familiar figure to many Pennsylvanians over the last 10 months of the coronavirus pandemic, explaining what the state was doing to combat the spread of the virus and begging residents to do their part by wearing a mask, washing their hands and staying away from each other.

"Stay calm, stay alert and stay safe," the state health secretary said, over and over.

Levine is one of the few transgender people nationwide serving in either elective office or as a high-ranking government appointee.

She leaves the Pennsylvania Department of Health at a critical time in the statewide response to the pandemic, with the state reporting hundreds of deaths per day and officials struggling to ramp up statewide distribution of the two COVID-19 vaccines.

Levine "has been a wise, calm, and dedicated partner during this pandemic and I couldn't be prouder of the tireless work she's done to serve Pennsylvanians," tweeted her boss, Democratic Gov. Tom Wolf. "She will be missed, but I know she will be a tremendous leader" on the federal level.

There was no immediate word on her replacement. The governor's office said it planned to make an announcement later in the week.

Levine was scheduled to hold her regular weekly news conference about the pandemic Tuesday, but that was scrapped after Biden's announcement, and Findley took her place to talk about the state's plans for expanded vaccine distribution.

Levine, a pediatrician who graduated from Harvard and Tulane's medical school, joined the Wolf administration in 2015 as physician general and became health secretary two years later.

When the state announced its first confirmed case of COVID-19 last March, she became the public face of the response and won plaudits for her calm, unflappable demeanor.

But she also earned plenty of enmity from Republicans and small business owners over statewide public health orders for people to stay at home, students to learn remotely, and businesses deemed "non-life-sustaining" to close.

And she faced tough questions over the high COVID death toll at nursing homes, with some Republicans contending the state didn't do enough to protect vulnerable residents. The state has reported more than 19,000 deaths attributed to COVID-19, over half of which have occurred in nursing homes. Levine defended her agency's handling of the outbreak.

Some of the criticism of Levine had nothing to do with her decisions as health secretary. As a transgender woman, she endured a stream of mockery and abuse on social media and elsewhere. She opened a news conference last July by addressing the transphobia that was being directed toward her.

"I want to emphasize that while these individuals may think they are only expressing their displeasure with me, they are in fact hurting the thousands of LGBTQ Pennsylvanians who suffer directly from these current demonstrations of harassment," Levine said. "Your actions perpetuate a spirit of intolerance and discrimination against LGBTQ individuals and specifically transgender individuals."

Levine is president of the Association of State and Territorial Health Officials. Aside from leading the state pandemic response, she worked on the opioid crisis and the state's medical marijuana program and promoted LGBTQ medicine.