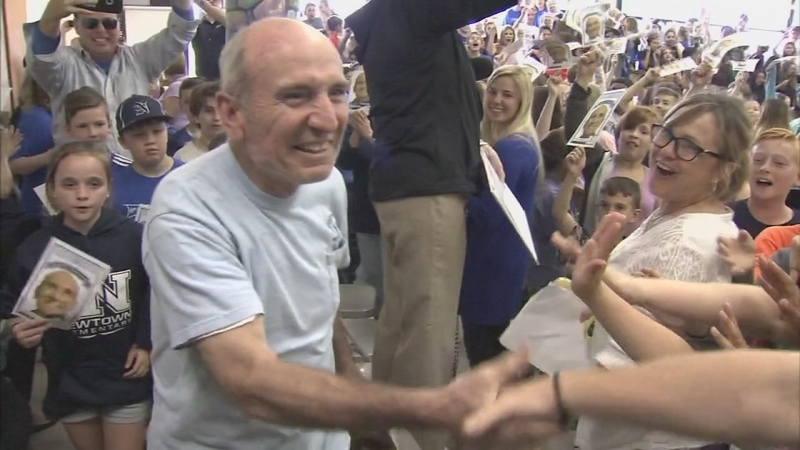 NEWTOWN, Pa. (WPVI) -- Ted Qualli, the 66-year-old janitor at Newtown Elementary School, has been selected the 2017 Janitor of the Year.

In a contest run by the Cintas Corporation, Qualli was nominated by his school and beat out over 1,200 nominees nationwide.

"What a surprise. I'm so overwhelmed and I just can't believe that it happened," Qualli told a packed auditorium Monday, fighting back tears.

But those at Newtown Elementary can believe it happened.

"Mr. Qualli is so awesome. He's our best janitor; he does everything for our school," student AJ Levin said.

"They just don't make them that way anymore. He is just absolutely one of the most amazing human beings on this planet," Kari Lazaro of the Newtown Elementary PTO said.

In many schools, janitors are often the first ones to arrive in the morning and the last ones to leave at night. And for Ted Qualli, the job is about much more than cleaning classrooms.

The Air Force veteran brings his old uniform on Veterans Day and talks to kids about his service. Each year, he gives plants he's grown to the entire staff and student body. And believe it or not, he knows the names of every one of Newtown's 850 students.

"You got to listen. You listen, everybody has a message that they're trying to tell you," Qualli said.

Newtown declared Monday Ted Qualli Day in his honor. The parent-teacher moms sang him a song at the announcement. And the kids, well, they just love him.

"He does all this stuff and he does it with a smile on his face," student Brooke Lavelle said.

"I just can't believe that people think that much of me. I'm the behind the scenes person that keeps everything going. I tried to put out all the fires," Qualli said.