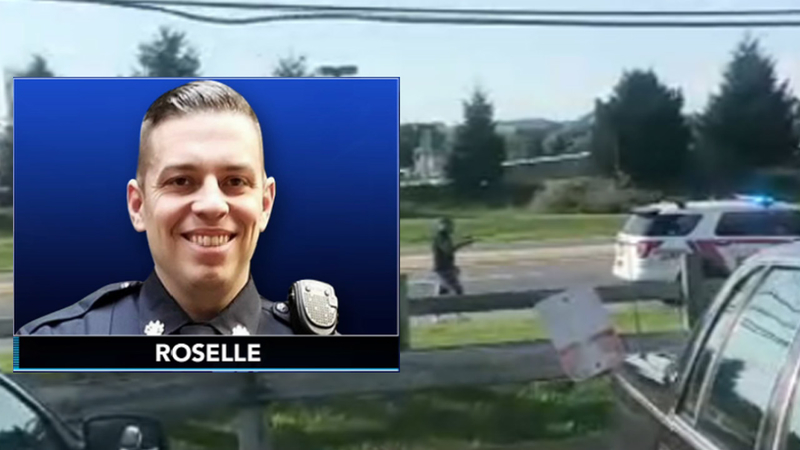 Charges against Officer Jonathan Roselle, 33, were announced on Tuesday.

Martin said the incident began when a woman pulled up to Roselle, who was on traffic duty, saying a man tried to get into her car.

Roselle drove to where the man was, at which point Santos jumped on the marked police vehicle and started banging on the passenger's side. Roselle ordered him to get off and away from the vehicle.

Arlene Figueroa, the mother of the victim's child, was very emotional during a press conference reacting to the DA's decision to charge a police officer in the fatal shooting.

Roselle called for backup, then Santos began to walk away. Martin said Santos then turned around and began to approach Roselle, who was now outside of his vehicle.

Roselle told Santos to get on the ground, Martin said, but Santos continued to approach, and Roselle fired five times. Santos was rushed to the hospital but was pronounced dead.

According to Martin, Roselle told first responders he "F----d up." He had a Taser, baton and pepper spray on him at the time.

Roselle is an Army veteran who served in Afghanistan and is currently in the National Guard. He had graduated the police academy in 2017 and had been on patrol by himself for just five months.

Outside the courthouse, a group of family members, friends and other community members that had protested Santos' killing said they welcomed the news, but added they would continue to pressure for a conviction.

Arlene Figueroa, an ex-wife of the victim, emotionally addressed the officer directly.

Roselle was arraigned Tuesday afternoon. He later posted bail, which was set at $75,000.

In a statement Tuesday night, one of Officer Roselle's lawyers, Gavin Holihan said:

"While the loss of life is always unfortunate, it is not always unjustified. My client believed and continues to believe his actions were justified."

Family reacts after officer charged in South Whitehall shooting. Watch the report from Chad Pradelli on Action News at 5 p.m. on August 7, 2018.