"The next thing I remember is being on the cold ground," Danial Moore said.
WPVI
By 6abc Digital Staff and Gio Benitez 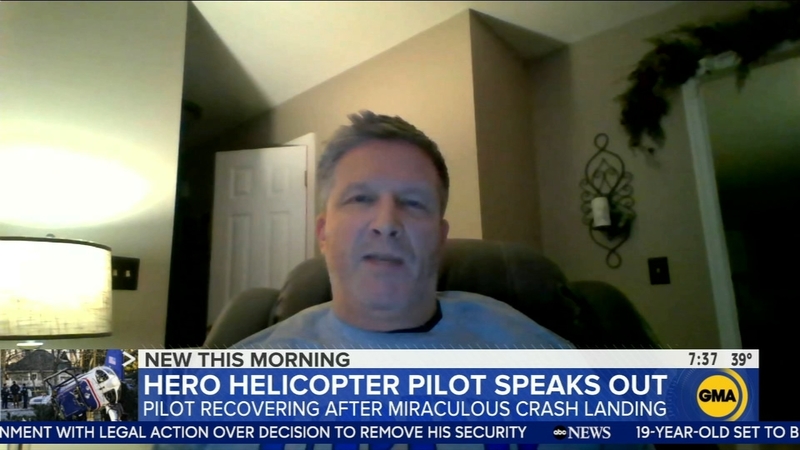 PHILADELPHIA (WPVI) -- There was a hero's sendoff over the weekend as applause could be heard outside the hospital for Danial Moore.

Moore was the pilot flying the medical helicopter that made a miraculous crash-landing last week in front of Drexel Hill United Methodist Church in Delaware County, Pennsylvania.

Moore, the 2-month-old infant and two medics were onboard the flight from Hagerstown, Maryland on its way to Children's Hospital of Philadelphia when the chopper crash-landed. They all survived.

"Everybody is conscious. I have one that is not alert and he's the pilot. My main concern right now is the 2-month-old child. I need an ambulance here right away," a crew member can be heard saying on a 911 call.

Moore was released from Penn Presbyterian Medical Center in Philadelphia on Sunday morning.

"I had God as my co-pilot that day, and we took on the care of the crew and when we landed in his front yard so that's kind of nice," Moore said outside the hospital.

On Monday, a day after being released, Moore spoke from his home in Virginia to "Good Morning America."

With so many people calling him a hero, "GMA" asked what is going through his mind right now.

"It's really overwhelming, it really is. I feel like I pretty much just facilitate the heroes in the back who are working on the patients. The things that my crew did after we crashed to me were amazing. I was just a lump on the ground and they were taking care of me," Moore said.

The crew kept caring for the baby and got the child to the hospital safely with no other injuries.

Moore says he doesn't remember "a whole lot" from that day.

"I do remember flying in, it was a beautiful day," Moore said. "The next thing I remember is being on the cold ground."

The pilot of 27 years says this is his first accident.

"Yeah and, you know, part of the frustration of not being able to remember is I can't sit back and Monday morning quarterback myself and nitpick all the things I did wrong," Moore said.

He is now recovering from eight broken ribs, four vertebrae fractures and a fractured sternum.

Moore has a message for those he calls the real heroes.