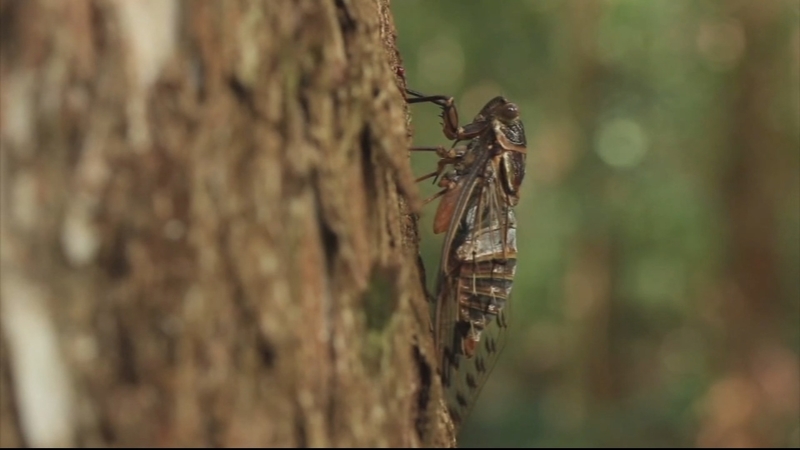 QUAKERTOWN, Pennsylvania (WPVI) -- After 17 years underground, periodical cicadas known as Brood X are starting to surface in the Delaware Valley.

Some of the creepy-looking insects could be seen emerging from the surface of the earth on Caroline Dutertre's 25-acre land in Quakertown. Bucks County.

She had a box covering the space, which likely helped heat up the ground to the 64 degrees needed to get them to come out.

"If there was this much in maybe a square foot of space, I can't imagine how many we have," said Dutertre.

CICADAS ARE COMING: Brood X cicadas will emerge by the billions in the eastern United States this year! Here's what you need to know.

According to Marten Edwards, a biology professor at Muhlenberg College, it will create a sight to see and hear.

"When it's really prevalent, it almost gets this flying saucer sound," said Edwards.

Edwards said some estimate the total for Brood X to be up to a trillion.

He showed us specimens from the last time Brood X surfaced 17 years ago. They have one purpose: to mate and drop eggs.

The area where you'll see the most cicadas is in between Philadelphia and Allentown, and their mating lasts from four to six weeks.

"The males will sing their hearts out and the females will see if they like the song. If they do, they'll click their wings and he'll find her," said Edwards.

Periodical cicadas, not to be mistaken by green annual cicadas, happen every couple of years only in the eastern U.S. But Brood X is specific to our region and is the largest.

Now with such large numbers set to pop up any day now, some people enjoying the evening near Lake Nockamixon say no way to the cicadas.

"I think I will stay in the house," said Ivory Taylor.