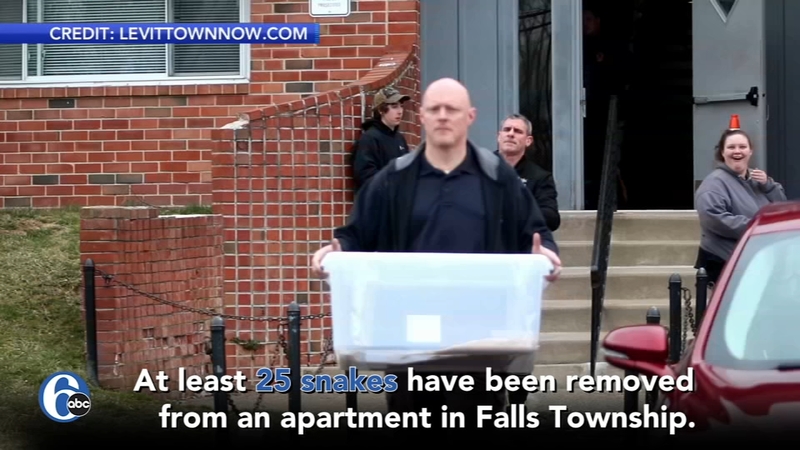 FALLS TWP., Pa. (WPVI) -- You've heard of snakes on a plane, but this was a case of snakes in an apartment.

The Levittown-Fairless Hills Rescue Squad responded to the call and took video and pictures of the frightening encounter Wednesday afternoon. Boxes and boxes of venomous snakes were removed from the Aspen Falls Apartments in Falls Township, Bucks County.

"My partner didn't come in. He is not a fan of snakes at all. He wanted nothing to do with it," said Mike Stebulis, Battalion Chief with the Rescue Squad.

It was a dangerous situation and police called in experts, like Joe Fortunato - also known as "Jungle Joe." He is a retired police officer and now a zookeeper and wildlife educator.

He says about 20 of the dangerous reptiles were inside the apartment.

"We are looking about 12 cobras, five rattlesnakes, two different type of species and two boa constrictors. So all but two were considered venomous, deadly venomous," said Jungle Joe.

Responding crews say the snakes were not properly locked in cages and could have easily escaped. They tell Action News this could have turned into a lethal situation.

Residents of the complex still can't believe that many snakes were inside of an apartment.

"I know they are pretty strict on animals here, so the guy must have been really good at hiding snakes. I don't know where he hid them at, but the apartments are not too big, so he must have had a two or three bedroom place. It's pretty crazy to think he could fit them in there," said resident Nick Brunoni

Falls Township police say they were tipped off about the snakes from another agency.

Experts say this was a very risky operation. Police believe the owner was planning on selling the snakes and say he did not have a permit to do so. Charges are now pending.

Emergency workers are thankful no injuries were reported.

The snakes are now in quarantine and will be moved to licensed facilities.

"It is something that you have to take very serious. These animals are deadly and they are much faster than you can ever imagine they are," said Jungle Joe.

Police tell Action News there were kids in the apartment, including an infant.

Experts say it is not illegal to own venomous snakes here in the state.

According to the Pennsylvania Fish and Boat Commission, "PA Fish and Boat Commission regulations only pertain to native species of PA. In other words, our regulations do not cover any species not found in PA. Therefore, you would not need a permit from our agency. However, you may want to contact you local municipal government to see if they have any ordinances in effect that regulate the possession of "dangerous animals" or exotic pets. Due to some recent high-profile cases in the news of non-native snake bites and snakes getting loose in neighborhoods additional municipalities are adding such laws."
Report a correction or typo
Related topics:
pets & animalsfalls townshippennsylvania newssnake
Copyright © 2021 WPVI-TV. All Rights Reserved.
More Videos
From CNN Newsource affiliates
TOP STORIES