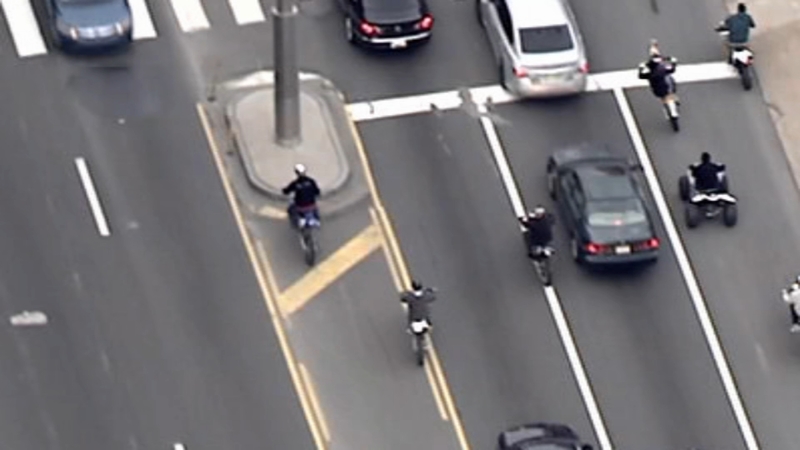 PHILADELPHIA (WPVI) -- It was a chaotic scene in Philadelphia late Friday as dozens of dirt bikes overtook several city streets.

Chopper 6 was overhead as they weaved in and out of rush hour traffic, and right through busy intersections.

At times they blew past police officers, who were helpless to stop them.

A large group of dirt bikes, Quads and ATVs started darting in and out of traffic.

They made their way up North Broad Street and then ultimately meandered through neighborhoods wreaking more havoc.

It happened just before 5 p.m. when 911 operators started receiving calls about 20 to 50 ATVs, Quads and dirt bikes were driving recklessly through various parts of the city.

Philadelphia Police Chief Inspector Scott Small said, "They're driving these vehicles very, very recklessly. They're going in and out of traffic, high rate of speed. They're going in the opposite direction of the path of travel."

At one point, they're doing wheelies in between cars, cutting through traffic.

They go around cars like a swarm of bees and if you are in their way, they go on the sidewalk and go around you.

And it doesn't matter if there are pedestrians, they just go around them too.

One guy almost gets creamed when he realizes he's about to go head-on into a car and stops.

Police say there's no logic, rhyme or reason as to when they may decide to stage one of these stunts.

They film them using helmet cams and post their videos later on social media for their entertainment.

Police say it's futile to try and stop them.

"They can go where a police vehicle can't. They can jump a curb, they can go between houses, they can go behind a house, and they go in a wooded area," said Chief Insp. Small.

But police do manage to catch them in other ways.

Through their police helicopters, they keep track of them and wait until they pull into a gas station to gas up and then send ground units to move in on them.

"And it's a live stop, not only do we confiscate the vehicle, the operator is going to get a lot of tickets, very expensive tickets," added Chief Insp. Small.

Police confiscate 100s of these dirt bikes, ATVs and Quads each year which are not street legal.

They have no license plate, no headlight or brake light, and no turn signals.

Normally these groups come around when the weather gets warmer, and Friday, the weather was a lot like spring.