Third down is the charm for Wentz and Eagles 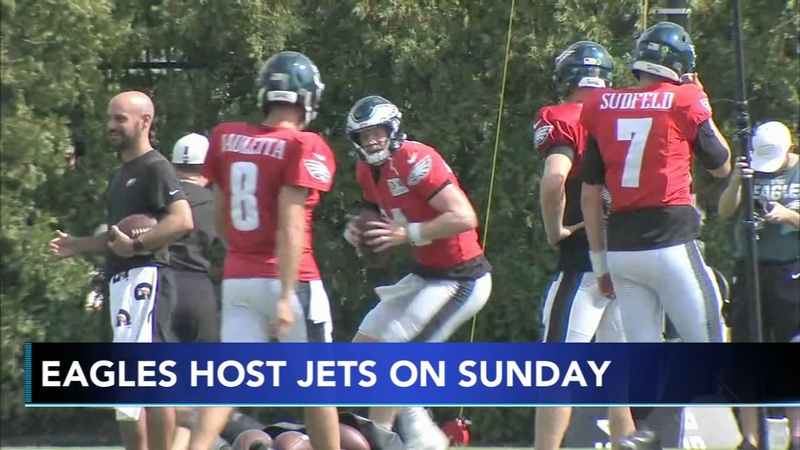 Eagles ready to take on Jets this Sunday

PHILADELPHIA (WPVI) -- The Philadelphia Eagles are the best team in the NFL on third down largely in part to Carson Wentz and his progression.

The Eagles QB credits their early-season success by the work they did in the offseason. Wentz says he's seeing the pre-snap read better now in his fourth season and processing the information a better rate.

Head Coach Doug Pederson has also taken notice, "I think number one, probably the biggest thing is just understanding more of the offense. Knowing where everybody is. He's getting the ball out of his hand. He's making great decisions with the football. Getting us in and out of, maybe a bad play into a better play. We've used probably a little more tempo offense or no-huddle offense which allows him to see the defense, which he's very good at doing. So there's probably a number of things. But I think overall, it's just his understanding of the offense and how, as we game plan, as Offensive Coordinator Mike Groh and myself put the plays together, how we can best utilize his strength to help us win."

Wentz also stressed the fact that his teammates are making plays.

The Eagles success on third down began week one against the Washington Redskins, where Wentz had a perfect passer rating on third and completed all of his touchdowns on 3rd down as well.

This past week in Green Bay, Wentz and the offense biggest numbers came on third down as well as down in the red zone where they were perfect against the Packers scoring on all five drives inside the 20-yard line.

"But you also know that when you have the ability to run the ball like we did the other night, good things are going to happen also, and so it takes that pressure off of the quarterback. And Carson's talked about it, I've talked about it and it's been I think a proven recipe league-wide when you can do that," Pederson adds.

Wentz has five touchdown passes in the red zone already which is the most among all NFC QBs.

Wentz admits that he does not feel like he has "arrived" in the NFL and is always looking for ways to be better like this Sunday versus the winless Jets.