"Life is short, you know, so if you do got kids out there, hug them," the victim's best friend said.
WPVI
By Katherine Scott, Jaclyn Lee and 6abc Digital Staff 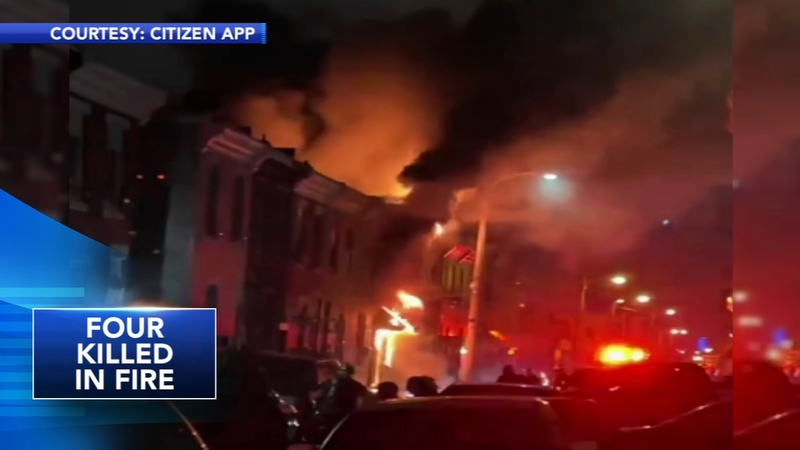 PHILADELPHIA (WPVI) -- A mother who jumped from a rowhome fire in the Kensington section of Philadelphia was the sole survivor of the blaze that claimed the life of her husband and three children, ages 12, 8 and 5.

"Right now we are frustrated and we are mourning, we are mourning with this community with these families," Philadelphia Fire Commissioner Adam Thiel said.

The fire broke out shortly after 2 a.m. Sunday on the 3200 block of Hartville Street.

Officials said firefighters arrived to find heavy flames coming out of the home, but not much was left once they came upon the scene.

The commissioner said the first engine arrived within two minutes of the first 911 call, but massive flames were blowing out of the first and second stories making rescue difficult.

"Unfortunately with fires burning hotter and faster than ever before, despite our best efforts, the best efforts of our members, we are tragically and unfortunately too often, too late," Thiel said.

Officials said a 38-year-old woman survived the blaze by jumping out of a window.

Action News has learned that the woman's husband and their three children were trapped and killed inside.

Taiana Juarbe, a friend of one of the victims, identified the 12-year-old victim as Yamalier, affectionately known as Gordo.

"He was kind. He was never a trouble maker," said Juarbe. "He was always protective with his brothers."

The boy's father was identified by friends as Alex.

Principal Charlotte Gillum-Maddox of Lewis Elkin Elementary School in the School District of Philadelphia said two of the children attended her school.

One was a third-grader and the other was in kindergarten.

Gillum-Maddox and several teachers came by to show their support for the family.

"They are our babies, and on a Sunday, we are here with the family partnering with them to make sure anything that's needed, they will receive," said Gillum-Maddox.

Officials: 4 dead, including 3 children after rowhome fire in Kensington

Action News spoke with neighbor Angel Rivera who said the father was his best friend.

"I said, 'Where's my best friend? Are you kidding? Are you sure he's back there?' Because the house was on fire. I couldn't go in there," said Rivera.

Rivera said he spoke to the mother before she was taken to the hospital. He described her body as being badly burned.

"He told her to (get) yourself out. Basically, jump out the window, and I'll go grab the kids. Those were his last words," said Rivera as he described his conversation with the mother.

Rivera was distraught and couldn't make sense of the tragedy on his block.

A woman told Action News her husband is the brother of the man who didn't make it. She said her husband was too shaken up to speak.

"Life is short, you know, so if you do got kids out there, hug them. Treasure them because you never know," Rivera said.

Officials have not officially identified the victims. An investigation is underway to determine the cause of the fire.

The fire department said the house did not have working smoke detectors.

They encourage anyone who does not have working smoke detectors to please call 311. They will come out and install them.

The school is now partnering with the Philadelphia Fire Department's prevention unit to ensure all of its students have lessons on fire prevention and fire safety.

Since January 1 of this year, the Philadelphia Fire Department reports 312 families have been displaced by fire, with 21 lives lost and 38 people injured.

"Philadelphia has a fire problem and we need your help because fire is everyone's fight," Thiel said.