There are three different kinds of smoke detectors, and you need to be aware of which you have so you know when to replace them.
WPVI
By Nydia Han, 6abc Digital Staff and Heather Grubola 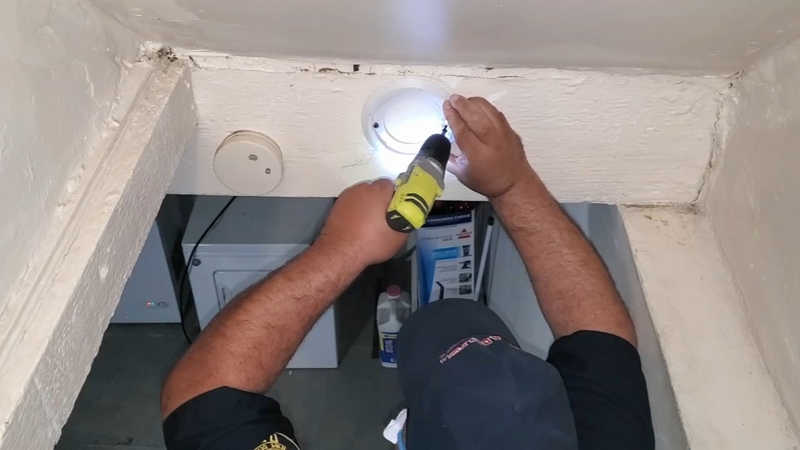 PHILADELPHIA (WPVI) -- The deadly fire in the Fairmount section of Philadelphia on Wednesday is a tragic wake-up call for everyone about how to protect your loved ones and homes from a devastating fire.

Fire officials said there were no working smoke detectors in the two units.

Two-thirds of home fire deaths occur in homes with no smoke alarms or no working smoke alarms.

The Philadelphia Housing Authority said when they inspected last spring, there were a total of 13 working alarms. So the questions Wednesday night are why didn't they go off and what can we all learn from the devastating event?

"The most recent inspection on the B unit was on May 5th... and at that time, we had six smoke detectors and three carbon monoxide working," said Senior Exec. Vice President of Operations for PHA Dinesh Indala.

"I don't know if they were replaced or tampered with, we have no idea. We're working with the fire department," said Indala.

RELATED: Smoke detectors: How to get them for your home in the Philadelphia region, and why you should

As the investigation continues, there are things you can do to make sure your homes are safe. First make sure you have working detectors, one on each floor, including your basement and don't install them near windows, doors, or ducts where drafts might interfere with their operation.

"Please don't tamper with smoke detectors or take the batteries out for any reason," said Indala.

Even if you have a false alarm resist the urge to take your detector down or remove its batteries. And any time your alarm does go off, leave your house immediately.

"Always assume there's a fire. When you've determined that it's safe, then you can get to the root cause," said Consumer Reports Tester Bernie Deitrick.

Some, like the ones apparently installed in the Fairmount PHA duplex, have sealed, lithium batteries that last 10 years. You should replace the entire unit every decade

Other alarms have removable batteries. Those batteries should be replaced every six months. A good time to do that is when we fall back and spring forward our clocks.

And all smoke alarms should be tested at least once a month, if not once a week, by pressing the test button and they should all be replaced every ten years.

In light of the fatal Fairmount fire, this year's Operation 6abc Save A Life campaign's launch date was moved up. In partnership with Kidde and Home Depot, the campaign is donating 1000 Smoke alarms to people in our community now and then another 10,000 later this year.
Kidde said one of the most common questions they get is where to put their smoke alarms.

Philadelphia fire officials said there were no working smoke detectors in the units where more than a dozen people lost their lives.

"We recommend at least ... one on every floor of your home including your finished basement," said Sharon Cooksey of Kidde.

Also don't install them near windows, doors or ducts where drafts might interfere with their operation.

Meantime, today's fatal blaze is not the first fire tragedy this season. On Christmas morning, flames at a Bucks County home claimed the lives of Eric King and his two young boys, 11year-old Liam and 8-year-old Patrick.

"We are looking at the Christmas tree that may have ignited as a result of Christmas lights on that Christmas tree," said Quakertown Police Chief Scott McElree.

So if you still have a Christmas tree in your home make sure it's away from any heat source including a radiator or heat vent, turn off the lights on your tree, keep the base filled with water, and then get rid of the tree as soon as you can.

Also be very careful when using space heaters put them on timers, make sure they have automatic shut-off and never put them any place near anything flammable.

6abc has had a longstanding partnership with the Philadelphia fire department to provide smoke detectors to people who need them with the help of Kidde and Operation 6abc Save a Life.

(Correction: A previous version of this article said smoke detectors that are hardwired do not need to be replaced, but they should be replaced every 10 years).