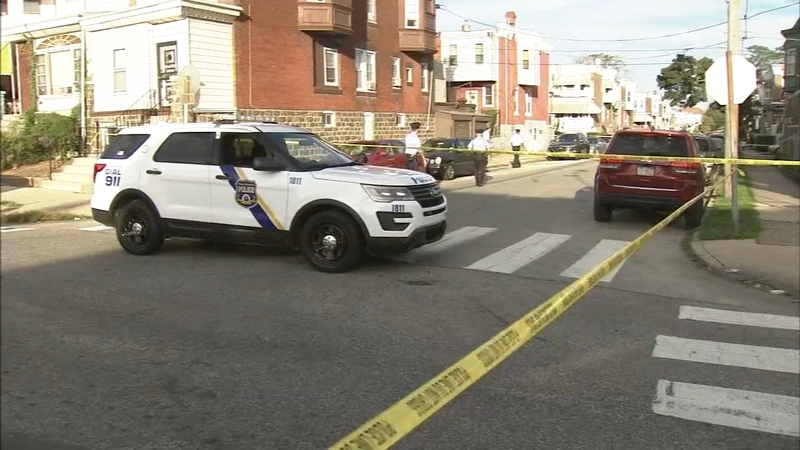 COBBS CREEK (WPVI) -- Police said a teenager was killed after a large number of shots were fired in the Cobbs Creek section of Philadelphia.

Neighbors near near 57th and Locust streets were shocked to hear that a 17-year-old man was shot to death around 4:30 p.m. Sunday

"There's 100 other things you could do besides picking up a gun and taking somebody's life," said Edgar Clarke.

Police were on scene for hours, marking more than two dozen bullet casings.

Police said the victim was shot multiple times and pronounced dead at the hospital.

"From witnesses, several males on bicycles were riding their bikes northbound on 57th Street," said Philadelphia Police Chief Inspector Scott Small. "They got off the bike and fired multiple shots."

Several bikes were being held as part of the crime scene.

Police also found three handguns discarded in the bushes outside of a home on 57th Street.

Investigators said one of the bullets struck a nearby home, going straight into the living room.

"A bullet went through the front window and lodged in the wall in the living room. At home at the time was a 45-year-old father and his 5-year-old son," said Small.

Police say while the father and son were not hurt, they were shaken up as the bullet went right over their heads as they were watching TV.

Some neighbors who walked by stopped and reflected on the whole ordeal.

"It just breaks my heart. It truly breaks my heart," said Theresa Nesbit. "It's sad this is going on in our city and in our neighborhood. Just murdering these young men."

Police said they are looking for three or four shooters.

One is described as a male wearing a white shirt and dark pants.

They are looking at area surveillance video for clues.