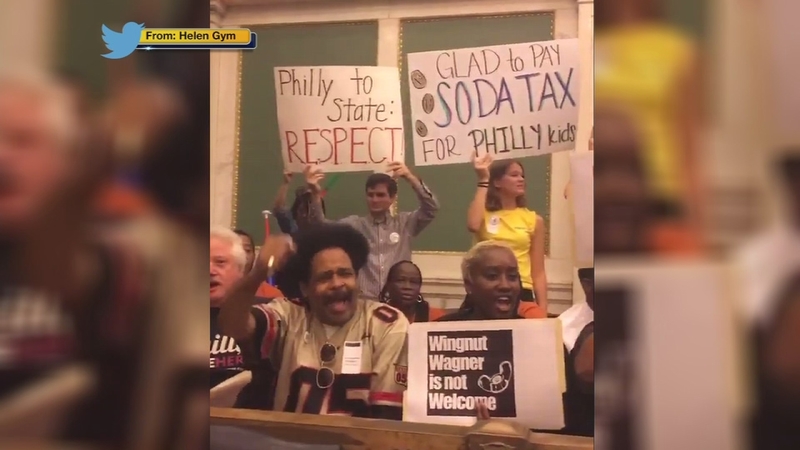 CENTER CITY (WPVI) -- A hearing on Philadelphia's controversial sweetened beverage tax had to be postponed on Friday after committee members were drowned out by protesters.

It was pure pandemonium. City Hall sounded more like a sports arena.

They were upset that they weren't included in a senate committee hearing.

Councilwoman Helen Gym said, "It seemed like this was a lopsided hearing where 80% of testifiers were speaking against the soda tax, and a very few represented who are benefiting from actual programs are being represented in the hearing. "

Councilwoman Gym shot video of the protest which included families benefiting from the city's new pre-k program funded by the tax.

At one point, a group of children took over the seats usually reserved for politicians.

Councilwoman Gym said the kids were facing down the state lawmakers trying to take their Pre-K.

When they wouldn't quiet, organizers cancelled the meeting.

He says the hearing was intended to let business owners and union leaders share how the tax is affecting them.

Soda's filled to the gills because it's not moving. People aren't coming in to buy soda.

A South Philly pizza shop owner didn't want us to use his name, but says he's seen a 30 percent drop in traffic since the tax took effect.

The hearing was scheduled by state senators including Republican Scott Wagner who is running for governor.

Gym says the tax is needed in part because in her words, Harrisburg has forgotten the city.