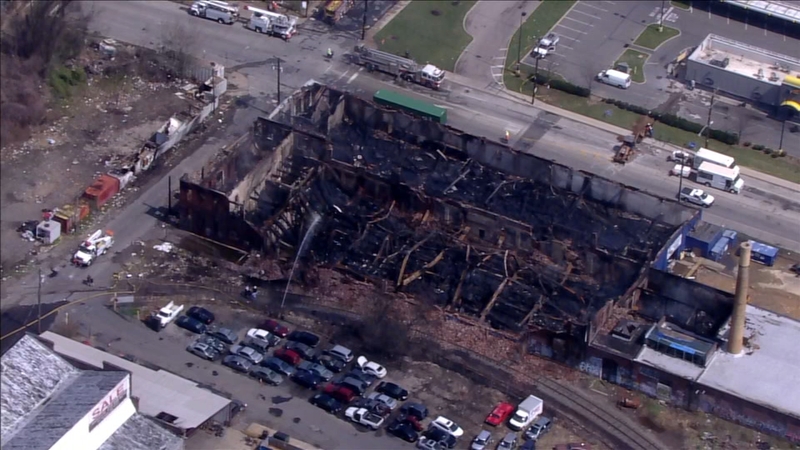 PHILADELPHIA (WPVI) -- Philadelphia fire investigators still waiting to get inside the scene of the four-alarm fire that heavily damaged a 60,000 square foot building in the Port Richmond section on Sunday night.

As of early Monday evening, investigators could not enter the structure.

That's because of hot spots that flared up, and concerns about the structural integrity of the heat-damaged walls of the early 20th-century industrial building.

The fire spread quickly through the building that housed a thrift store called The Thrifty Irishman.

Lee Keller told Action News he first noticed what seemed to be a small fire in the rear portion of the building.

Keller said he stepped away for five to 10 minutes, and when he returned he said the building "was just engulfed with black smoke and flames coming out."

Building and store owner Robert McCormac told us his staff locked up at 5:20 p.m. Sunday. The fire was reported after 7 p.m.

Chopper 6 was over a multi-alarm warehouse fire in the Port Richmond section of Philadelphia on April 7, 2019.

The store's employees praised their boss. While the store was a money-making business, they told us McCormac is a compassionate man who goes out of his way to help those down on their luck.

Hakima Yassini, who has worked at the store for three years, said a particular focus was to help homeless people. If they needed clothes or shoes, she said, McCormac would provide them for free.

Carol Ann Wavals, an employee of six years, said if someone lost their belongings in a fire McCormac would make furniture available for no charge.

In addition to Philadelphia investigators, federal ATF agents are assisting in determining the origin and cause of the blaze.

4-alarm warehouse fire rages out of control in Port Richmond. Jeff Chirico has more on Action News at 11 p.m. on April 7, 2019.