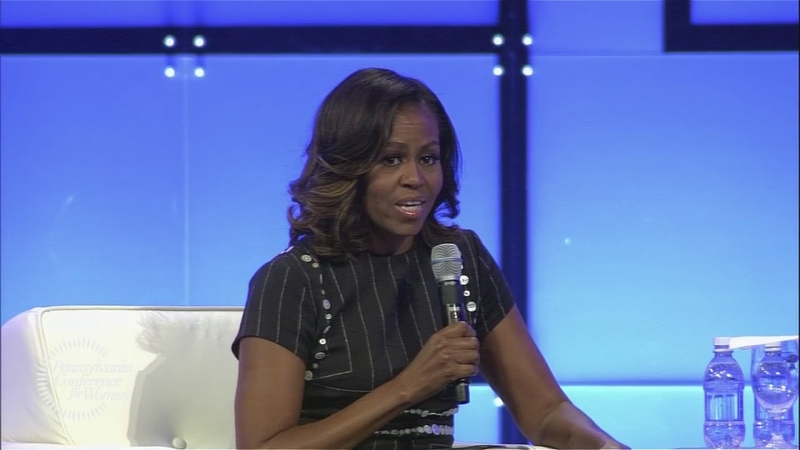 PHILADELPHIA (WPVI) -- The Pennsylvania Conference for Women brought some star power to Philadelphia on Tuesday.

For Mrs. Obama, the chat with about 12,000 people wasn't political: it was personal. Rhimes asked what many have been wondering.

"What is it like to go from that pace to nothing?" she asked.

"It's good, it's really good," Mrs. Obama said. "It's been a decade of being shot out of a cannon and no time to think about feelings."

She talked about everything from raising her girls in the public eye, to serving the American people, to finding her role and her voice.

It's a juggle and a struggle, she says, that's really not that different from our own.

"Living in the White House is kind of what everyone else is doing - juggling careers, trying to be relevant, trying to make sure your marriage is intact and kids are healthy - but doing it under harshest, brightest light there is," Mrs. Obama said.

She says raising the next generation of strong women starts at home, as it did for her.

"What I think is sometimes missing for young girls is, so early in our lives, we are shushed," she said. "Sometimes we are treated a little too preciously."

"We think it's enough to love a girl? No. We have to treasure a girl, respect her and give her power at a very young age," Mrs. Obama said.

She said she may be what she calls a "former," but she will continue her mission to empower women wherever her life and career take her

"I am constantly telling young women to speak up and talk. Don't waste your seat at the table, and if you are scared to use your voice, get up and let someone else in there who is going to use it," she said.

Some of our own 6abc star power was there as part of the conference. Monica Malpass and Tamala Edwards served as emcees.