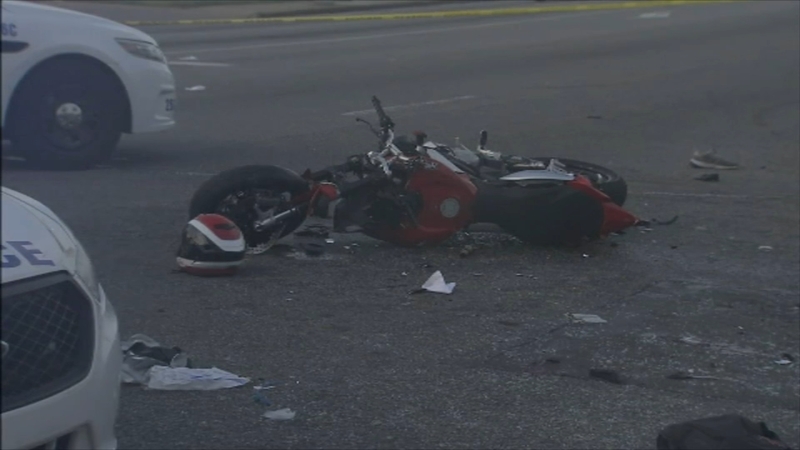 PHILADELPHIA (WPVI) -- A motorcyclist is dead after crashing into an SUV with a woman and four children on Monday in the Port Richmond section of Philadelphia.

It happened at the corner of Aramingo Avenue and Venango Street around 6:30 p.m.

Police say the driver of a Honda SUV was heading southbound on Aramingo Avenue, attempting to make a left turn onto Venango Street, when she was struck by a man in his 30s on a motorcycle.

The motorcycle slammed into the rear right door of the vehicle where a three-day-old baby girl was strapped in a baby car seat. Some witnesses rushed in to try to help.

"The mom was screaming to people to get the door open to get the little girl out," said Tina Rentas of Port Richmond.

The impact crushed the door trapping the little girl.

Mark Rentas, 18, who's studying to be a paramedic, tried to get her out.

"The car was bent into her leg and I tried to use a crowbar to get her out," he said.

"They tried to pry the door open but they couldn't get it open," added Mark's mother.

"Fire department paramedics actually had to use the Jaws of Life to get the children out, specifically the three-day-old who was in the car seat," said Philadelphia Police Chief Inspector Scott Small.

Paramedics also took three other children, a five, nine and 11-year-old out of the car and rushed them to St. Christopher's where they are all reported to be in stable condition with minor cuts from the broken glass. Their mother also suffered minor injuries.

The motorcyclist was rushed to Temple where he later died.

"Talking to some witnesses who told us the motorcycle that was going northbound on Aramingo was operating at a high rate of speed," said Small.