The Phillies have three players who will appear in the postseason for the first time after playing more than 600 career games.

PHILADELPHIA (WPVI) -- Aaron Nola took a perfect game into the seventh inning and Kyle Schwarber homered twice as the Philadelphia Phillies clinched their first playoff berth in 11 years with a 3-0 win over the Houston Astros on Monday night.

After Brandon Marsh caught Mauricio Dubon's fly ball in center for for the game's final out, players jumped and cheered in jubilation before meeting at the mound where they hugged and bounced around some more.

The video board at Minute Maid Park displayed the team's logo and the words: "Congratulations Philadelphia" as the Phillies celebrated.

A small but vocal group of Philadelphia fans congregated near the team's dugout and chanted: "Let's go Phillies," in the bottom of the ninth inning.

The Phillies clinched at the same ballpark where they secured their last postseason trip on Sept. 14, 2011. That game was a 1-0 victory over the Astros highlighted by a complete game shutout by Hall of Famer Roy Halladay.

Philadelphia's postseason drought was the longest active one in the majors after the Seattle Mariners clinched their first playoff berth in 21 years Friday night.

The Phillies entered the opener of the final regular season series of the year needing a win or a loss by the Brewers to get a National League Wild Card spot. The Brewers rallied to beat the Diamondbacks 6-5 in 10 innings a few minutes before Philadelphia wrapped up the victory.

Nola (11-13) struck out nine and didn't allow a baserunner until Yordan Alvarez singled with two outs in the seventh. David Hensley followed with a single and Nola was replaced by Jose Alvarado, who struck out Kyle Tucker to end the inning.

Zach Eflin pitched a scoreless ninth to complete the shutout and get his first save in 11 years of pro ball.

Schwarber got things going for the Phillies in their first visit to Houston since Sept. 16, 2012, with a leadoff homer off Lance McCullers (4-2)

It is the eighth multi-home run game this season for Schwarber, who leads the NL with a career-high 46 home runs, and gives him 199 homers in his career.

The Phillies have three players who will appear in the postseason for the first time after playing more than 600 career games. Jean Segura leads the group with 1,327, J.T. Realmuto has 1,004 and Rhys Hoskins is at 666.

McCullers allowed six hits and one run with five strikeouts in six innings.

He said before the game that he planned to get some of his starters out early to rest since Houston has already clinched the best record in the American League.

Phillies: LHP Brad Hand (elbow tendinitis) threw a bullpen session Monday in Houston and could throw live batting practice Wednesday. If that goes well, he could be ready to return for the postseason.

Houston Justin Verlander, whose 1.80 ERA leads the majors, will try for his 18th win when the series continues Tuesday against Ranger Suarez (10-6, 3.37).

MLB's new wild-card format is similar to the one currently used in college baseball for the NCAA Super Regional round: The three games will be scheduled on three consecutive days from Oct. 7-9 at the higher seed's field. The first team that gets two wins advances.

WHAT'S NEW IN BASEBALL'S WILD-CARD ROUND?

The best-of-three wild card format is a change from the sudden death one-game format that's been in place since 2012.

Six teams each from the American League and National League will qualify for the postseason, including the three division winners in each league. The three wild-card teams in each league will be the teams with the best record that didn't win their division.

The top two teams with the best records in each league will get a bye and don't have to play in the wild-card round. Those four teams get a few days of rest. Right now, that would be the Astros and Yankees in the American League and the Dodgers and Braves in the National League.

WHY ARE THE PLAYOFFS STARTING LATE?

October's postseason festivities will bleed into November before a champion is crowned.

That's mostly because of the sport's labor strife that resulted in a work stoppage over the winter. It delayed the beginning of spring training and pushed the regular season back about a week. Baseball players and owners salvaged the usual 162-game season, but to do that, they had to move opening day from March 31 to April 7.

Hence, a late start to the playoffs. 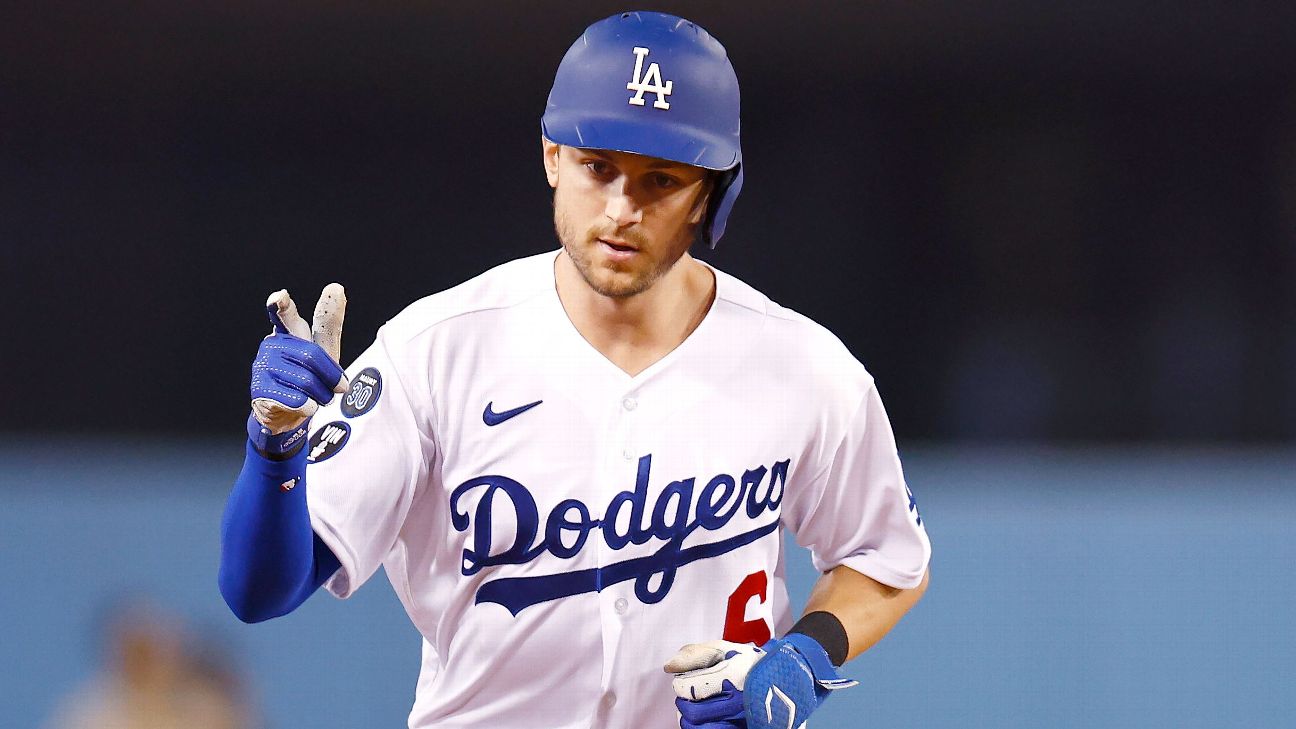