Change to residency requirement for Philly police and corrections applicants

New officers have six months to move to the city after getting hired.
WPVI
By Katherine Scott 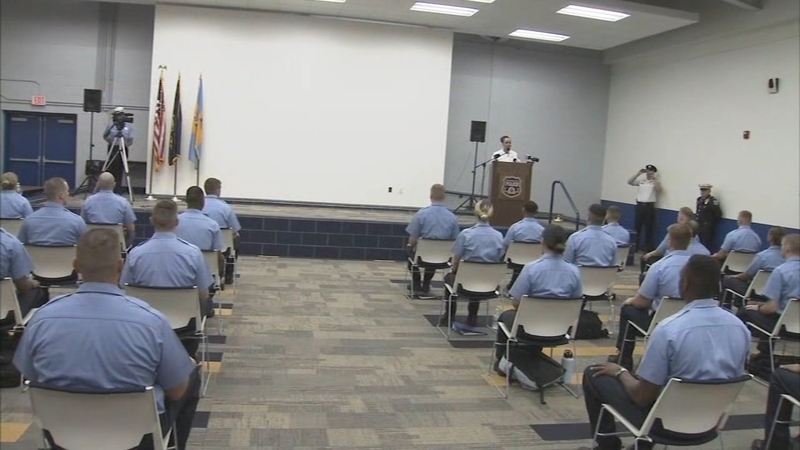 PHILADELPHIA (WPVI) -- A new class of Philadelphia police officers was sworn in at Temple University on Friday.

"This is an exciting time, not just for our families, for them, for the Department, for the community, because this means as we get into warmer months, we have more people to be out on foot, out on bicycles, and to increase our visibility," said Police Commissioner Danielle Outlaw.

This was the first class to begin training since the pandemic began, and comes as Philadelphia changed a rule that required new police and correctional officers to live in the city for at least a year before applying.

Now, new officers have six months to move to the city after getting hired.

In 2015, the Philadelphia Police Department had 6,600 sworn officers and 800 civilian personnel.

"We used to have 5,000 or 6,000 people take the test. We're down to 2,000, 2,500 take the test. Having a pre-employment residency requirement is like saying you can only play for the Phillies if you grew up in Philadelphia," said Mayor Jim Kenney.

The residency requirement rule took effect in 2020 with the goal of boosting diversity.

But the department has faced staffing challenges.

"When you look at the roll calls, and you look left and right, there's hardly anyone there," said Fraternal Order of Police Lodge 5 President John McNesby.

McNesby added, "We've lost a lot of people through attrition, injuries, retirement, so we want to make sure we get enough people back on the street to keep the community safe and each other safe."

The mayor asked the city's Civil Service Commission to exempt police recruits and correctional officers from having to meet the one-year residency requirement to broaden the potential pool of applicants.

Council president Darrell Clarke is not on board with this change.

Clarke stated, "Is it too much to expect that department leaders can find 100 candidates per recruiting class who are qualified residents of Philadelphia to join the force? The idea that the city cannot recruit from within and find a ready, willing, and able pool of police recruits is a slap in the face that we should refuse to accept."
Report a correction or typo
Related topics:
philadelphiamayor jim kenneydanielle outlawphiladelphia police
Copyright © 2022 WPVI-TV. All Rights Reserved.
PHILADELPHIA POLICE
5 people shot in North Philadelphia near Temple University
Man shot multiple times in Philadelphia's Frankford section
16-year-old shot 7 times while sitting on sidewalk
Man hospitalized after shooting in Nicetown
TOP STORIES
5 people shot in North Philadelphia near Temple University
AccuWeather: Round of heavy rain overnight
Votes still being counted as Oz, McCormick locked in tight race
Rise in brazen thefts force convenience stores to close
NJ school nurse saves life of student's grandmother
Delco bus driver accused of taking upskirt photos of students
Singing umpire saves the day with national anthem
Show More
Election Results: Live updates on Pennsylvania primary races
Teen dies after being hit by dirt bike in North Philly; suspect sought
1st monkeypox case in US this year reported in Massachusetts
18-year-old dies after being trapped under sand at Jersey Shore
Biden invokes Defense Production Act for formula shortage
More TOP STORIES News