Police said the suspect was wearing a yellow or orange reflective jacket, tan pants with shorts pulled over and a hat.
WPVI
By Katherine Scott 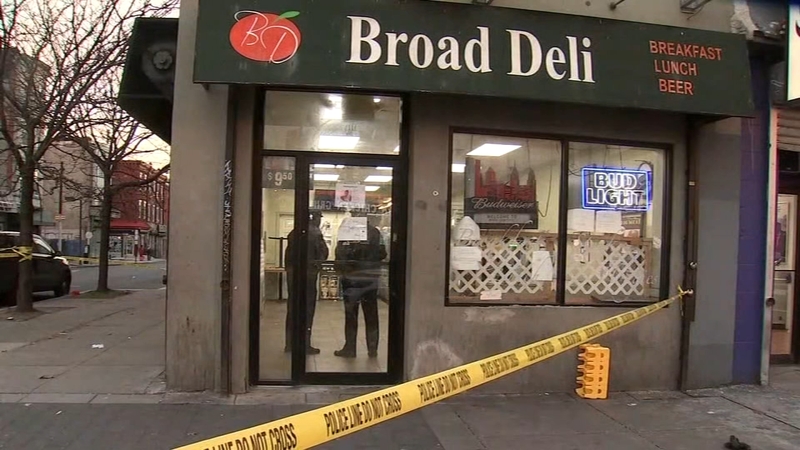 PHILADELPHIA (WPVI) -- Philadelphia police say a 38-year-old man was killed near the intersection of Broad Street and Susquehanna Avenue in North Philadelphia around 4 p.m. on Monday as he struggled with a robbery suspect.

Police say the entire incident from Monday was caught on surveillance video, which has not yet been released.

This nearby store owner heard the shots and closed early.

A dark vehicle pulled up to Broad Deli and police said a man and a woman got out of the back seat.

First, police said the man robbed people inside an ATM at gunpoint before approaching the 38-year-old victim.

"He was standing at the counter, looked like he was purchasing some items when the shooter approached him and pointed a gun at his head, and the victim is clearly seen pushing the gun away," explained Chief Inspector Scott Small.

A struggle ensued and shots were fired as the fight spilled onto the sidewalk.

The victim was shot and killed.

The man and woman fled in a car, which was later found and towed for evidence.

Police say the suspect was wearing a yellow or orange reflective jacket, tan pants with shorts pulled over, and a hat which fell off as he fled, and police picked up.

State Senator Sharif Street has an office right down the block.

"We knew something bad was going on, but we couldn't tell exactly what was going on, and again, within minutes police cars were coming from every direction," said Street.

It was just last month that bullets pierced a different office of Street's in the city's Germantown section.

Street expressed the urgency for reducing the accessibility of firearms and the need for police presence to deter crime.