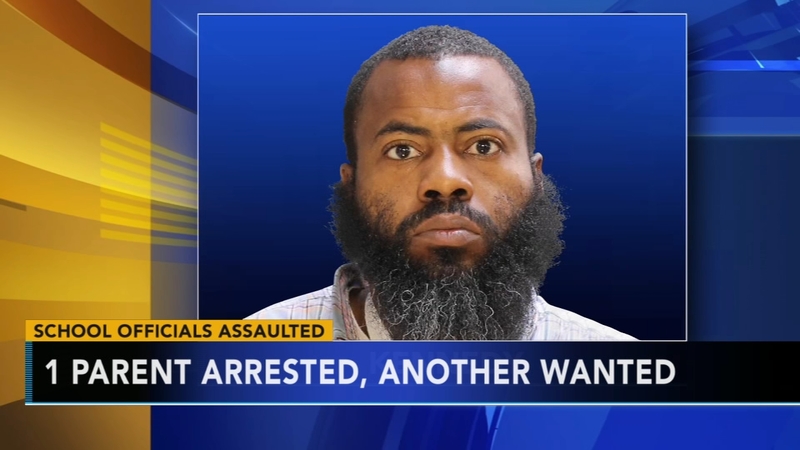 One parent arrest another wanted

NORTHEAST PHILADELPHIA (WPVI) -- A mother of a Philadelphia student has been charged in the assault of two elementary school administrators and police are continuing to search for the father wanted in connection to the incident.

Police are asking for any information leading them to 40-year-old Louis Kennedy.

The incident happened around 12:30 p.m. Wednesday during Family Fun Day at the Robert B. Pollock Elementary School on the 2800 block of Welsh Road.

Police say the two entered the school yard when the vice principal tried to stop them. She instructed the parents to go to the school's office and sign their son out according to protocol.

Police say Myers pushed the vice principal and punched her in the shoulder as the principal arrived to help.

Myers then punched the vice principal in the arm again, police say, and continued to curse on the school yard, refusing to follow instructions.

Police say Myers then punched the principal causing a cut to the left side of his face. Myers and the principal struggled and the two fell to the ground, according to authorities.

Kennedy then punched the principal on the back of his head five to six times, police say.

The vice principal helped separate the fight and the parents fled the scene in a green sedan, police say.

Myers was soon arrested, but Kennedy remains on the loose.

"They were both assaulted by the parents today. This all happened with the kids around," said Philadelphia Police Lt. Dennis Rosenbaum.

Recently, parents have voiced their concerns about leadership at the school.

Last month, iPads donated to help children with autism were returned after the organizer of the foundation that donated them said he found they were sitting in a closet unused. Sammie Sanchez, a Philadelphia police officer who runs the foundation Bowling for iPads, said he was shocked when the principal told him the school did not need them. The School District of Philadelphia said there were technical issues.

The iPads along with other concerns from parents sparked a protest just a few weeks ago where they demanded new leadership, calling for the ousting of the principal.

Police said Wednesday's alleged assault was not related to the recent grievances.

"Teachers, staff, administrators and principals are all considered a protected class, so that automatically becomes an aggravated assault," said Rosenbaum.

Both the principal and vice principal did not go to the hospital, but they suffered cuts and bruises.

Students were sent home with a note detailing the incident.

"The School District of Philadelphia is committed to the safety and welfare of its students and staff. The assault on two respected administrators is not acceptable and cannot be tolerated. Parents are our primary partners in the education of their children and that is why we work to ensure their respectful engagement in schools. While we can have differences, physical assaults will not be allowed. We are actively pursuing these instances with public safety authorities and fully cooperating with the investigations."