The resolution includes a note that the district will discuss developing incentives & work to provide easy access to the vaccine.
WPVI
By Bob Brooks and Associated Press 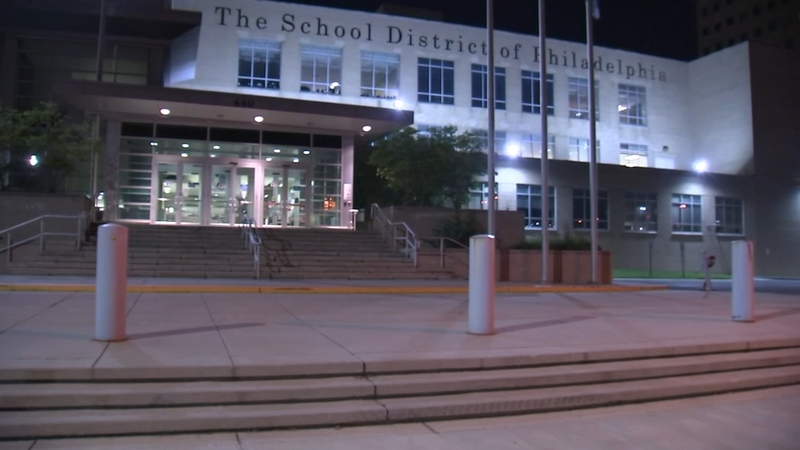 Philly School Board votes to impose vaccine mandate for all employees

PHILADELPHIA (WPVI) -- The Philadelphia School Board voted unanimously Tuesday night to mandate that its 20,000 teachers and staff members be vaccinated against COVID-19, but details of when the mandate would go into place are still being worked out, school district officials said.

The move comes amid other state and local mandates for teacher vaccinations in the last week including New Jersey Gov. Phil Murphy's mandate Monday that teachers and school staff statewide be vaccinated by Oct. 18 or submit to regular testing. New York City Public Schools also issued a no-option vaccination mandate for the city's 148,000 public school teachers and staff Monday.

The resolution before the Philadelphia School Board late Tuesday included an option for exemptions for a finite number of medical conditions or for "sincerely held" religious beliefs. Details were still being worked out with the unions that represent teachers and other school employees, Superintendent William R. Hite Jr. told the board Tuesday, including negotiating possible discipline if teachers don't comply, developing incentives and creating a plausible deadline for when they have to be vaccinated.

All school personnel and state workers in New Jersey will have to be vaccinated or undergo regular testing.

On Tuesday night, Action News spoke with Stephanie Nelson of North Philadelphia who is directly impacted by the decision. Her daughter works within the school district and wants her to be safe.

"Stay safe. Nobody wants to die and you certainly don't want to die a horrible death," said Nelson.

In Bridesburg, Mary Beth Gill's nephew will be in the third grade and wants the same.

"I work at Jefferson and I had to get it. The vaccine is mandatory as of September. So, I think straight across, everyone should have to get it," said Gill.

But not everyone is on board with this decision.

Seanaia Brown in South Philadelphia believes there are other ways to keep those in school safe than a vaccine.

"I don't feel it should be mandated, that's not fair. Wear your mask, constantly washing your hands, social distancing," said Brown.

Board members and student ambassadors asked if the students in a classroom will know if their teacher has been vaccinated. Acting Philadelphia Health Commissioner Cheryl Bettigole, who attended the virtual School Board meeting, said that information would be protected under health privacy laws.

Each driver is guaranteed four hours a day with opportunities to pick up more time at a pay rate of $19.49/hr., officials said.

Bettigole said she's been working with the district over the last six to eight weeks preparing for schools to re-open. She told the board more children are currently hospitalized in Philadelphia with COVID-19 than have been at any other point in the pandemic - stressing the Delta Variant means younger people are getting infected.

Unlike New Jersey, the Philadelphia resolution as presented did not allow teachers to opt-out of vaccination for other reasons. Hite said much of the alternative mitigation efforts allowed in the New Jersey mandate will already be done in Philadelphia as school starts.
Philadelphia schools will re-open next week, and for many of the district's 120,000 students, it will be the first time they attend in-person classes since nearly 18 months ago when the city first announced COVID-19 lockdowns. The district has been preparing for the return of students August 31, announcing a mask mandate for staff and students earlier this summer and a weekly testing regimen for staff, as well as twice-weekly testing for students in competitive sports or activities like chorus.

The resolution passed Tuesday includes a note that the district will discuss developing incentives and work to provide easy access to the vaccine for teachers and staff and certain contract workers who will fall under the mandate.