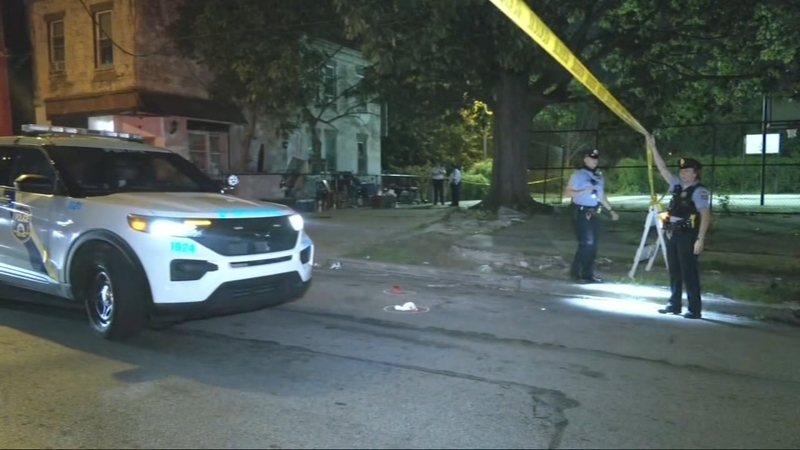 Multiple shootings in another violent night in Philadelphia

PHILADELPHIA (WPVI) -- A woman has died and 12 others were injured in separate Philadelphia shootings on Monday night.

Around 5:36 p.m., police say three people were shot near Cumberland and Stanley streets. The three victims, a 57-year-old man, a 27-year-old man and a 23-year-old man, were all hospitalized in stable condition.

Just before 6 p.m., a 25-year-old woman was shot in the head on the 300 block of W. Huntingdon Street. She was taken to the hospital by a civilian car, where she was pronounced dead. Multiple weapons were recovered at the scene. Police say one person was arrested. The female victim has not been identified.

CAUGHT ON VIDEO: Surveillance video captured the harrowing moments a one-year-old girl was shot while being held by her mother inside a convenience store.

Just before 8 p.m., police say a 22-year-old man was shot near the 5500 block of Old York Road. He was able to walk into an area hospital for treatment. He's expected to survive.

Hours later, a 39-year-old man was shot once in the chest on the 3000 block of Potter Street around 10:03 p.m., according to police. He was rushed to the hospital where he was placed in stable condition.

Police say three people were also shot just after 10 p.m. near the intersection of 19th and Cumberland Streets in North Philadelphia. There was no word on the conditions of the three victims.

Around 10:12 p.m., police say a 31-year-old man was shot twice on the right side of his chest on the 3200 block of Spangler Street. He is currently hospitalized in critical condition.

Then around 11:50 p.m., police were called to a triple shooting in West Philadelphia near a playground.

Police say a woman and two men were shot on the 5100 block of Westminster Avenue. Police say all victims are in stable condition recovering at a local hospital.

They say the shooter fled the scene wearing a mask and a wig.

"In addition to multiple shell casings, there are several pieces of clothing that belonged to various victims and witnesses who were trying to flee as the shots were being fired," Philadelphia Police Inspector D.F. Pace said.

Anyone with any information in connection with these shootings is asked to call Philadelphia police at 215-686-TIPS.