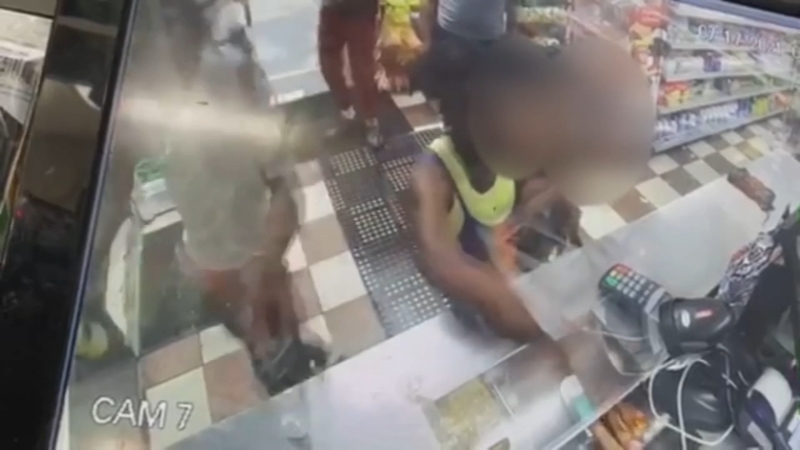 PHILADELPHIA (WPVI) -- Of the roughly 40 shootings that took place in Philadelphia over the weekend, one is among the most unnerving.

Surveillance video obtained by Action News captured the harrowing moments a one-year-old girl was shot while being held by her mother inside a convenience store in West Philadelphia on Saturday.

The video, which has been edited due to its graphic nature, shows the hail of gunfire from both inside and outside the store at the corner of 50th Street and Haverford Avenue. Video also captured the frantic mother's plea for help after her child was shot in the leg.

Bullet holes are still visible at the store. Choudary said she is scared for her safety.

The surge in gun violence appeared to get to District Attorney Larry Krasner twice at an event on Monday while he discussed the surge in violence.

"An approximately one-year-old child was shot one time," Krasner paused. " I think we're all impacted by the injustice of children suffering wounds."

Three people have died and 33 others were injured by gunfire in a violent weekend in Philadelphia.

The girl is expected to survive her injuries. Action News has learned that one person has been arrested in connection with the shooting.

Krasner also presented checks to organizations working to curb the violence by impacting the lives of those already touched by the gun crisis.

"We know exactly what these kids need because we are with them every day," said Vanessa Young, the found of Power of Paint Art Academy.

The Action News Data Journalism Team found 123 children have been shot in the city to date, and 21 of them have been killed by gunfire. It's a dramatic increase from this time last year.

Police are investigating a double shooting in West Philadelphia that wounded a 1-year-old child.

Overall, more than 1,200 hundred people have been shot this year, including 263 people who have died as a result of the violence.

"They're out there doing their job under very trying circumstances, risking their lives, protecting themselves and the community with bringing guns off the street," said FOP Lodge #5 President John McNesby.

Commissioner Danielle Outlaw released this statement on the shooting:

"The brazen nature of this shooting shows that those committing violent crimes rarely stop to think about how their actions will affect those around their targets. My thought and prayers are with the child and her family as they recover from the emotional and physical trauma of this incident."